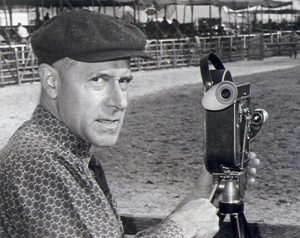 4:50-5:30 | Kim Tomadjoglou, “Crafty Bastards: How Amateur Filmmakers Preserve Media, from the Borderland to the Art Lab”

Dan Streible, “The Orphan Film Movement at Twenty”
In the late 20th century, the term “orphan film” entered the vernacular of archivists and scholars devoted to the many categories of neglected films whose survival was at risk. In his talk, Streible will consider how the 21st century experienced a dramatic change in preservation and research practices by focusing on so-called orphan films.

Kim Tomadjoglou, “Crafty Bastards: How Amateur Filmmakers Preserve Media, from the Borderland to the Art Lab”
Taking a closer look at the craft and methods of amateur filmmakers, Tomadjoglou will consider two case studies from widely different contexts, the itinerant borderlanders Felix and Edmundo Padilla and Lew Brevort Odell’s Progressive Art Laboratory, to explore how these filmmakers use different types of media.

Dan Streible is an Associate Professor of Cinema Studies at New York University, Associate Director of NYU’s Moving Image Archiving and Preservation program, and Director of the Orphan Film Symposium. He is co-editor of Learning with the Lights Off: Educational Film in the United States (Oxford, 2012), and serves on the National Film Preservation Board.

Kim Tomadjoglou is an audio-visual curator-archivist specializing in rights clearances, preservation, collections management, and museum programming, and has curated retrospectives at museums and festivals internationally. She has served as director of the American Film Institute’s national collection and as principal liaison to the Library of Congress, where she was a 2019 Kluge fellow.