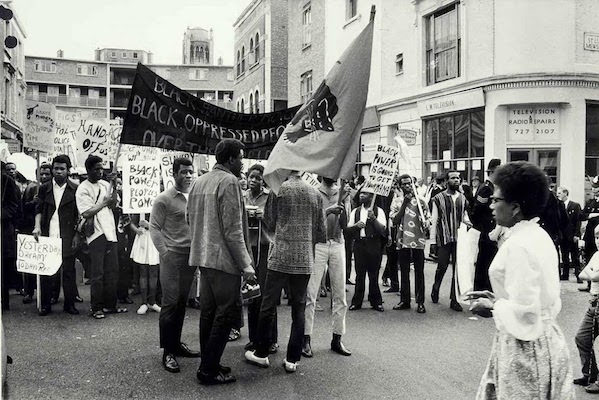 Join us for a roundtable discussion, “Black Rhythm Happening,” with Michael Gillespie (City College of New York), Ashley Clark (Film Programmer at Brooklyn Academy of Music), Lauren Cramer (University of Toronto), and Yasmina Price (Phd candidate at Yale). As a critical mass, this is a gathering of scholars devoted to thinking about blackness and cinema. The collective work concentrates on the aesthetic, historiographic, and political capacities of the idea of black film. With an emphasis on the formal and the cultural, the work of the group will entail brief presentations followed by a group discussion. Together the roundtable will consider the nuances and complexities of black film with attention to the past, present, and future.

Please note: Closed captioning will be provided by YouTube within 24 hours after the event has concluded.

Ashley Clark is the director of film programming at the Brooklyn Academy of Music. He has curated film series at BFI Southbank, the Museum of Modern Art, TIFF Bell Lightbox, and the Smithsonian National Museum of African American History & Culture, and among other venues. His writing has appeared in Film Comment, Sight & Sound, and The Guardian. He is author of Facing Blackness: Media and Minstrelsy in Spike Lee’s “Bamboozled” (2015).

Lauren McLeod Cramer is an Assistant Professor in the Cinema Studies Institute at the University of Toronto. She is a founding member of liquid blackness, a research project focused on blackness and aesthetics, and is the co-Editor-in-Chief of liquid blackness: journal of aesthetics and black studies. Her writing has appeared in The Journal of Cinema and Media Studies, The Black Scholar, Black Camera, Film Criticism, liquid blackness, and InMediaRes.

Yasmina Price is a writer, researcher, and PhD student in the Departments of African American Studies and Film/Media Studies at Yale University. She focuses on anti-colonial African cinema and the work of visual artists across the Black diaspora, with a particular interest in the experimental work of women filmmakers. Recent work has appeared in New York Review of Books, The New Inquiry, and Social Text Online.

Michael Boyce Gillespie is author of Film Blackness: American Cinema and the Idea of Black Film (Duke University Press, 2016) and co-editor with Lisa Uddin of Black One Shot, a black art criticism series on ASAP/J.