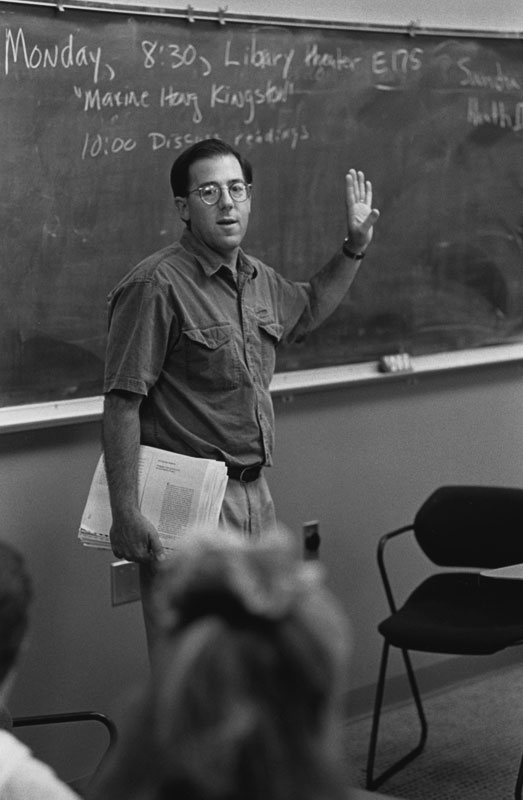 In 1995, the Center hosted “Rethinking American Studies: Connecting the Differences,” a six-week summer institute for high school teachers funded by a $108,000 grant from the National Endowment for the Humanities, plus additional support from UWM. I was the Director of the Institute, which featured distinguished faculty from the UWM campus (many of them now teaching elsewhere, alas). The grant proposal stated: “Each week will focus on a moment in American cultural history when cultural differences and their connections are particularly vivid: (1) The Colonial Encounter (16th to 18th centuries); (2) The Rise of the New Woman (19th century); (3) Rewritings of ‘The Jazz Age’ (the 1920s); and (3) Contemporary Migrations of Identity.” Seminar leaders were Rolando Romero (Chicano/a Studies), Michael Wilson (Native American Studies), Joyce Kirk (African American Studies), with special presentations by Victor Greene (History), Christopher Lane (LGBTQ Studies), and Reginald Horsman (Critical Race History). Visiting scholars included Amy Ling (Asian American Studies) and Arnold Krupat (Native American Literature). Participants numbered twenty-five, about half from the Milwaukee Public Schools and half from schools in the surrounding metropolitan area. The Center staff provided outstanding logistical support and offered their experienced guidance in how to shape each day’s program. As a result of the Institute, a network of UWM faculty emerged who were dedicated to advancing curricular change in regard to race, ethnicity, sexuality, and nationalism. That network eventually helped design the proposal to create UWM’s Cultures and Communities Program in 2000, which today offers an undergraduate certificate and sponsors courses in over a dozen departments across the campus. The leadership of Center director Kathleen Woodward throughout these years greatly helped facilitate this networking.

In 1999, I was on a panel with two other relatively unknown artists/scholars: Mary Flanagan (a UW-Milwaukee graduate) and Mark Hansen. The dialogue was smart, energetic and engaging. We were touching on subjects that not too many academics were willing to entertain. I remember thinking to myself: “What will happen to the three of us going forward?”

I worked with Michel de Certeau to plan a conference on the Rhetorics of Technology at the Center in 1990. At the time, technology was not a popular subject among humanists and social scientists. We were far ahead of the curve. I continue to work in this field. In 1992 I published an article entitled “Subversive Rationalization” inspired by the conference (Inquiry 35, 301-22). It includes the following mention of the conference:

“Michel de Certeau used the phrase “rhetorics of technology” to refer to the representations and practices that contextualize technologies and assign them a social meaning. De Certeau chose the term “rhetoric” because that meaning is not simply present at hand but communicates a content that can be articulated by studying the connotations technology evokes. See the special issue of Traverse, no. 26, Oct. 1982, entitled Les Rhetoriques de la Technologie, and, in that issue, especially Marc Guillaume’s article, Telespectres, pp. 22-23.”

I vividly remember my brief visit to the Center for 21st Century Studies. It was at the invitation of medical anthropologist Paul Brodwin, convener of a conference on Biotechnology and Culture, and Kathleen Woodward then the director of the Center. I was the summation commentator and probably spoke a bit too long (thus? probably not ending up in the conference volume) but vividly remember the engagement of Herb Blau paying attention all the way through, and then engaging me in a long discussion with him in the evening.

The warm hospitality of Kathleen and Herb was scintillating, and I treasure the time Herb spent giving me a rich set of insights into his career and the history of theater as he saw it. I can’t remember if Hassan Ihab was present, but I remember we talked at some length about him.

The conference itself was very successful. Highlights for me were the talks by, first of all, of Hannah Landecker who had come with me from MIT and presented a tour de force model of STS studies in being both technically and historically incisive and culturally illuminating — her now classic essay on the HeLa cell and how it was culturally reworked in three difference horizons of thought about the ability to use living tissue as a tool for biological scientific discovery, intellectual commons versus intellectual property, and racialization — and Susan Squier (who if I recall was the keynoter) bringing literary and popular culture insights to how medical and STS issues were reformulating how we think about ourselves. Janelle Taylor, Lisa Cartwright, Tom Csordas, and Anne Wexler gave memorable talks, and, all in all, I found the conference fascinating and stimulating.

A nice bonus was walking down to the waterfront (I had of course visited Milwaukee on occasion when I lived in Chicago) and seeing the stunning, then brand new, Quadracci Pavillion of the Milwaulkee Art Museum designed by architect Santiago Calatrava, transforming the waterfront, museum experience, and the adjoining space of the earlier modernist Eero Saarinen building for the Museum and war memorial.

I was at the center for Twentieth Century Studies (as it still was then) in 1996-97, as a young academic pre-tenure, working on what would become my second book and parts of my third. The theme was the body, and I have wonderful memories of coffee breaks with Ellen McCallum and Karen Riggs, and helpful talks with Paul Brodwin, whose work on medicine and illness helped me think about how to model the complexities of reactions across social groups to a major epidemic in early nineteenth century England. Joan Weiner’s work was further afield, but her incisiveness and clarity remain exemplary to me of what rigorous inquiry should be and do. Those weekly seminars were a lifeline, and Kathleen Woodward was so wonderfully generous, creating opportunities for all of us to think together with her characteristic warmth and creativity. I owe much of my sense of what academic community should be to my year at the Center, and it had an incalculable, but real and substantial effect on my thinking and publications well into the future. Just over twenty years later, here I am, finishing my fifth book on the body. Happy fiftieth anniversary, and thanks for all you did, and do!