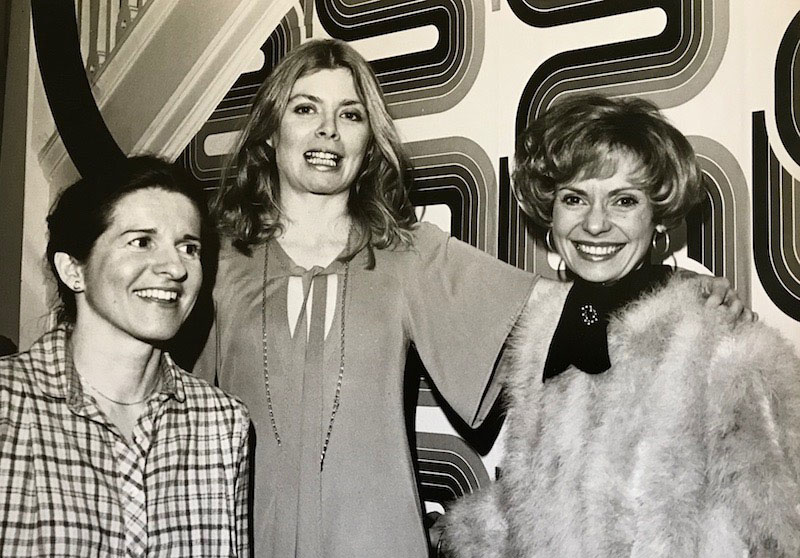 Here we are, the Three Graces, as Ihab Hassan liked to call us, or—depending on his mood—the Three Furies. In the 1980s sometime.

I recall feeling a bit alone in those days. I was surrounded by folks who thought or just assumed that US media were great.  I thought they served us poorly and I wanted to figure out why. The Center gave me an early opportunity to present my analysis.

Audience reception to my paper was mixed. A literary scholar named Gombrecht said it was the best paper he’d encountered in the past year. I’m not good with names but when you’re a grad student and someone takes you aside and says something like that, you remember.

I also remember well known scholars in attendance who spoke in perfect paragraphs, which they composed on the spot in the lively back and forth of auditorium discussion. John Fiske: paragraphs. James Carey: beautiful paragraphs. Later, over beer at a bar near the Center, Fiske would tell me what he really thought of my paper. ‘Nonsense,’ he said when I claimed that commercial media firms cared little for their audiences. ‘Nine out of ten television programs fail in the first season. That shows how powerful audiences are.’

Don’t be fooled by the quotation marks. I’m reconstructing a conversation that happened over 30 years ago. What I most readily recall was how wonderful the Old Style on tap was. A bar is a bar but a bar in Milwaukee has meaning.  What I also recall, with some regret, is not sharing with Dr. Fiske what else I was thinking. If a business fails nine times in ten and remains standing, it’s got power. Maybe, I thought, a little more than its audience does.

Let me end not with another recollection but a judgment. As a critic of US media performance I no longer feel alone. I wish I still did.

After receiving my PhD at the University of Texas and Austin in 1984, I was an Assistant Professor for four years in the Department of Spanish & Portuguese at UWM, before moving in 1988 to the University Kansas where I spent my career until I retired in 2014. In 1985-86, I held a resident fellowship and the (then) Center for Twentieth Century Studies. At the Center that memorable year, I was privileged to participate in the remarkable faculty seminar, “Rewriting Modernism,” enriched by the stellar intellectual guidance of Center director Kathleen Woodward and seminar organizer Andreas Huyssen and the participation of guest speakers and other fellows.

The seminar, which constituted my de facto post-doctoral education in critical theory, changed the direction and deepened the intellectual rigor of my own academic career. My own paper for the seminar formed the foundation of a chapter in my 1994 book Latin American Vanguards: The Art of Contentious Encounters (U of California Press). My year at the Center—shaped by conversations among fellows and Kathleen, Andreas, Rosalind Krauss, Gabriele Schwab, Herbert Blau, Matei Calinescu, and Ackbar Abbas among many others—nurtured the emerging theoretical framework of Latin American Vanguards, of my subsequent monograph Performing Women and Modern Literary Culture in Latin America (U of Texas Press 2006), and of my work on global modernisms in Cuba’s avant-gardes.

Moreover, Kathleen’s Center leadership and model of intellectual collaboration deeply marked my own subsequent extensive mentoring of doctoral students and junior faculty at KU and of my co-directorship in 1998 of a multi-disciplinary faculty seminar on Performance and Performativity at KU’s own Hall Center for the Humanities. Although I have moved back to Milwaukee in retirement, I very much regret that I cannot attend the 50th Anniversary celebration because of an MLA Executive Council meeting in New York with which it coincides. But I will be toasting with you all in spirit and with the deepest gratitude of an intellectual lifetime. Congratulations!!!

Congratulations on the forthcoming 50th anniversary. It is very exciting! My year as a Fellow at the Center was one of the most rewarding and intellectually simulating events of my life. I look forward to reconnecting with the Center after all these years in October.

I have many good memories of the semester I spent as a Senior Fellow in the Fall of l981, and the most delightful was of the visit of the composer John Cage. The campus was under construction at the time, so he took me on a tour of the building sites so that we could listen to all the sounds and appreciate them. I reciprocated by inviting him to accompany my family on a trip upcountry to observe the migrating geese. John Cage had a wonderful way with children and soon engaged my six-year-old son Tom in serious conversation, about mushrooms, among other topics, about which he had great expertise. Along the way we came to a patch or woods, and John Cage suggested we stop so that he and Tom could go mushrooming together. And off they went, hand in hand.

I recall this event with both enthusiasm for the conference dialogue and the fact that it coincided with some special aspects of my life and work at that time. My presentation focused on the relationships fusing art, architecture and context, plus it covered both the environmental art and radical architecture movements of the 1980s. Also, one of the most famous SITE works of my early career – the ‘Inside/outside Building’ – had been completed in Milwaukee during 1984 (unfortunately, later destroyed by a local developer). And, as a final celebratory memory, I had met my future wife, Kriz Kizak in Cleveland a month before the Center symposium and this was the first lecture of mine she attended. She seemed to like the message of my program and that led to marriage.