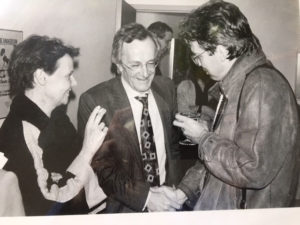 To begin with, I attach a photo (re-photographed with my I-phone) from a visit by Jean Francois Lyotard (not sure which of his several visits it was), shown with his wife and myself at a Center reception after his lecture, on Kant and the sublime, as I recall.

My first time at the Center for Twentieth Century Studies was April, 1979. I had been invited to speak at a symposium on psychoanalysis. I was in my second year as an assistant professor (at Miami University) and was way more junior than the other speakers. At dinner that evening I happened to be seated next to Stephen Heath who already had a major international reputation. He asked me if I had any book projects. While I was in fact not working on a book, I knew one always had to answer yes to that question; so I made up a book on psychoanalysis and feminism. He said he was leaving to go back to England in 3 days, but if I could get him a proposal before he left the country he would consider it for the book series he was editing. (This was long before the internet and international mail was so slow and unreliable.) I went back to Oxford, Ohio, wrote up a book proposal that day and sent it express mail to him in Milwaukee. That book became The Daughter’s Seduction, published in Heath’s series in 1982, and it absolutely made my career. I feel I owe that career to the Center for Twentieth Century Studies. This was the kind of place where assistant professors had real access to major international figures, and I felt very lucky. It was about being at the right place at the right time, and Milwaukee’s Center for Twentieth Century Studies was definitely the right place!

I was a graduate research assistant at the Center in the late 1970s and was the first person to get a PhD in the now-defunct Modern Studies program, which was formally located in the English department but was in fact a project of the Center (it was a bit hard to explain to conventional departments when I went on the job market, but I ended up in a fantastic university). All of my most important academic contacts and conversations came through my work with the faculty and visitors at the Center, which was absolutely formative to my intellectual life. Andreas Huyssen, Kathleen Woodward, and Patricia Mellencamp were among the inspirational, energetic young faculty who energized the program for students like myself, and visitors I had the opportunity to interact with ranged from Edmond Jabes to Nam June Paik to Carlos Fuentes to Clement Greenberg.

Prior to coming to graduate school in Comparative Literature at UW-Madison I worked as a musician. A drummer to be exact. Not a good one, just a drummer. Going to graduate school was something else entirely. Or so I had convinced myself. Not long after arriving in Madison I fell in with three remarkable women studying cinema: Serafina Bathrick, Maureen Turim and Diane Waldman. One of the first “ah, so this is why you came to graduate school!” moments I had is when Maureen and I went to an event at what at the time was called, “Center for Twentieth Century Studies,” under the directorship of Michel Benamou. It was the fifth in a series of international film conferences regularly convened at the center, a conference devoted to the then hot topic “Cinema and Language.” During a roundtable I sat next to Raymond Bellour who I later, much later, invited to give a presentation on Marnie during a conference at the Walker Art Center commemorating the centenary of the publication of Freud’s Traumdeutung. Also present at the event was Stephen Heath among many others. Maureen, who seemed to know everyone on both sides of the Atlantic, also at a certain point introduced me to Pat Mellencamp who, it turned out, was hosting an evening for participants at her home. She invited us. We went. Had I not been young and impressionable the evening might have been rather dull, but at a certain point all was interrupted by someone playing the piano. It was a steady 12 bar blues progression played not with panache, but with that distinctive–by god, I know this one–intensity. I quickly got up to see who was playing and it was Stephen! He was soon joined by most of us, some singing along, others playing skiffle on a grater. That was me, the one who thought graduate school was something else entirely. It was not. 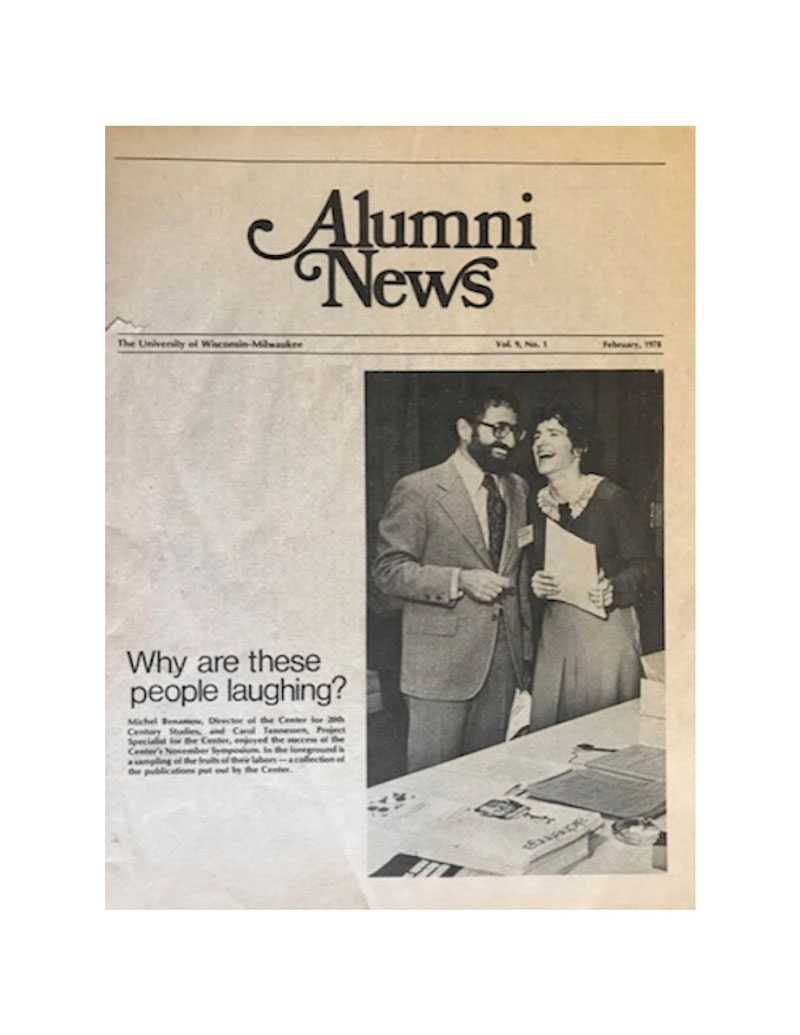 Why indeed (are these people laughing)? Michel Benamou and Carol Tennessen. February 1978.