Center posters through the years

One of the first humanities research centers in the US, the Center has been at the forefront of many of the major developments in the interdisciplinary humanities for half a century. Its groundbreaking conferences over the years drew scholars and artists from all over the world into conversation and collaboration, including six international film conferences in the 1970s and 1980s that helped constitute film studies as an emergent discipline. More recently, C21 has focused on pressing questions concerning the political and ecological crises of the contemporary moment, with conferences and events examining nonhumans and extinction, animal-human relations, digital culture, the Anthropocene and climate change, debt, and the legacy of worldwide social movements since 1968. 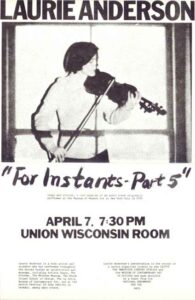 Today, as at its founding, C21 continues to nourish new forms of thinking in the humanities, arts, and social sciences. The Center continues to bring in nationally and internationally recognized critics, writers, and artists for lectures, seminars, and workshops that serve the UWM community and the public at large. Guests of the Center over the years include artists Nam June Paik, Dick Higgins of Fluxus, Laurie Anderson, and John Cage; theorists Stuart Hall, Teresa de Lauretis, Jean Francois Lyotard, Judith Butler, and Jean Baudrillard; authors Anaïs Nin and Eugene Ionesco; filmmakers Isaac Julien and Frederick Wiseman…the list goes on and on. 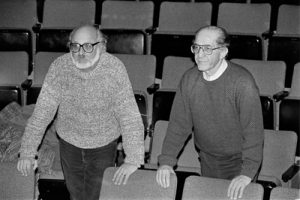 Through its conferences and events, as well as its annual Fellows program, the Center also fosters scholars in their early careers, helping to provide a crucible of scholarly exchange in which their work can develop and grow.

Celebrating the Patricia Mellencamp Founding Collection
To kick off our 50th anniversary symposium, C21 welcomed Distinguished Professor Emerita Patricia Mellencamp back to campus for a special event on Thursday, October 25. A former Fellow at the Center who taught for 30 years in the Film Studies program at UWM, Mellencamp amassed a variety of 16mm film prints, including films by Buster Keaton, Charlie Chaplin, and others. These prints are currently being catalogued, cleaned, and preserved by the Moving Image Society, a dedicated group of undergraduate and graduate students under the supervision of Film Studies Professor Tami Williams. With Mellencamp’s return to campus for Remembering the Center for 20th Century Studies, we hosted a special event and dedication of the Patricia Mellencamp Founding Collection.

On Friday, October 26, 2018, we hosted a special one-day symposium, Remembering the Center for 20th Century Studies. Current and former faculty, doctoral students, and Center directors joined us to reflect upon and exemplify the Center’s intellectual history and legacy for humanities research today.

To support the next 50 years of innovative research, lectures, performances, and events, give to C21. Your tax-deductible gift will help us to increase the quality and amount of C21 programming, including support for new initiatives such as our Collaboratories program, and will enable us to support Fellows and graduate students in greater numbers.

Help foster a more vibrant future for C21 and the humanities. Donate today.