The Historical Arc of the Commons

From Magna Carta to the Sky Trust: The Historical Arc of the Commons 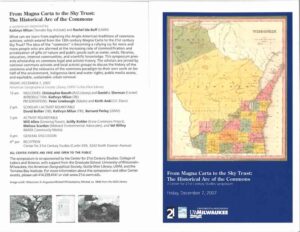 The final event of the fall 2007 semester, a day-long symposium on commons activism on December 7, was a joint effort by the Center, the Tomales Bay Institute (TBI), and the American Geographical Society Library (AGS) at UWM. The idea for the event originated in a submission to the Center’s permanent call for conference proposals from Rachel Buff (History, UWM) and Kathryn Milun (TBI), the symposium’s organizers. The event sought to bring scholars and activists together to discuss the history of the commons and the relevance of the commons paradigm to causes such as the environment, public media access, and equitable, sustainable urban renewal.

After welcomes by Christopher Baruth, Curator, AGS, and Daniel Sherman, Center director, the day’s proceedings kicked off with presentations by Peter Linebaugh (History, Toledo) and Keith Aoki (Law, UC-Davis). Linebaugh lamented the loss of ancient rights embodied by the Magna Carta to forces of privatization, political power, and empire, and argued that commons activism may be a way to recover “things taken from us.” Aoki focused on the legal “Public Trust Doctrine” and the notion of common heritage to discuss specific ways in which commons principles can work in land management, academic, and agricultural practice under the motto “it’s not about who owns the thing, but about how it is managed.”

A scholar/activist roundtable in the early afternoon featured David Bollier (TBI), Kathryn Milun (TBI), and Bernard Perley (Anthropology and Center fellow, UWM). The latter argued for the preservation of aboriginal knowledge from deep time in a presentation addressing environmental questions in general, and that of growing threats to the availability of fresh, clean water in particular.

In the second part of the afternoon, an impressive line-up of local activists—Will Allen (Growing Power), Julilly Kohler (Kane Commons Project), Melissa Scanlan (Midwest Environmental Advocates), and Vel Willey (MATA Community Media, who also recorded the entire event on film)—participated in a roundtable. After the speakers introduced their organizations and projects, symposium presenters and the audience of faculty, students, and members of the wider Milwaukee community arranged their chairs in a large circle for a probing discussion of concrete ways to realize commons ideas in local, national, and global contexts. Following the symposium, participants moved from the AGS Library to the Center conference room on the 9th floor of Curtin Hall for an animated reception. 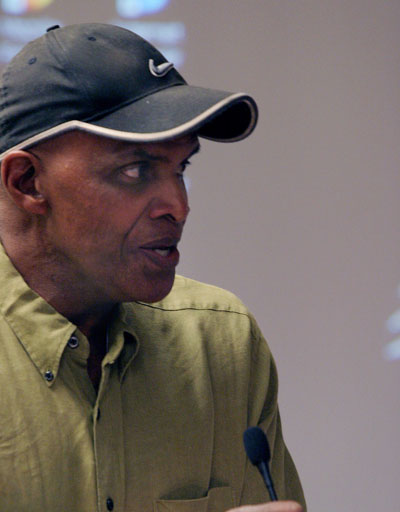