The conference convened for a final day on October 25 at the Hefter Conference Center. The first panel of the day, “Landscapes of Protest 2: New Connections,” rooted the discussion in international politics. First, in “The Rise and Fall of an International Counterculture in the 1960s,” Jeremi Suri (History, UW-Madison) described how diplomats and public figures such as President Johnson and Henry Kissinger began to reexamine basic assumptions in the late 1960s. The resulting “fundamental shift in the cultural and political underpinnings of society” has had wide-ranging repercussions.

Next, Yoshikuni Igarashi (History, East Asian Studies, Vanderbilt), showed how unprecedented economic growth in Japan shifted politics and culture in the country. His talk, “Japan’s Long 1968: Dreaming of Class Warfare in the Age of Mass Consumption,” detailed how a more equitable distribution of wealth transformed Japanese culture by narrowing the gap between urban and rural areas and increasing television consumption.

His talk was followed by that of Simon Prince (History, Oxford), who explained how Northern Ireland was part of a worldwide revolt in 1968. Entitled, “‘We have seen these sort of people at work lately all over the globe’: Northern Ireland and 1968,” Prince’s paper outlined how activists confronted imperialism locally and internationally.

Finally, Dina Mahnaz Siddiqi (independent scholar), in her presentation, “Bangladesh and Nationalism Since 1968” posited that the year has “no immediately apparent relevancy” for South Asia. Siddiqi, in an attempt to “provincialize and decenter 1968,” claimed that the year was mediated through very specific power relations, using state coercion and the policies of international aid organizations as examples.

James Ferguson (Anthropology, Stanford) delivered the conference’s second keynote address, “An African 1968: Humanism and Invisibility” to a standing-room-only crowd on Saturday. In an effort to bring Africa out of the “global shadows” of 1968 and “disrupt the euro-centrism of the conception of the 1960s,” Ferguson insisted that places regarded as peripheral (such as central Africa) played key roles in the broader phenomenon that we know as “the sixties.” Focusing on Zambia and its neighbors, Ferguson traced the development of an “African socialism” that “put the human at the center of all things” and drew on indigenous notions of cooperation. Ferguson drew stark contrasts between this idealized notion of African humanism and the reality of the brutal dictatorships of the time. Central to Ferguson’s argument was “the principle of simultaneous visibility,” in which a second, invisible world acts in conjunction with a visible reality. A lively 45-minute discussion session concluded Ferguson’s keynote. 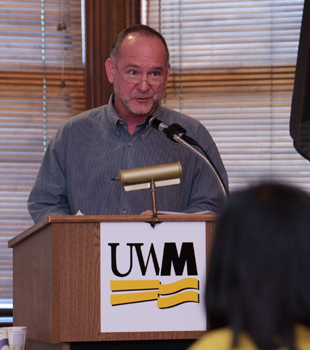 After lunch, the conference reconvened for the panel, “Bodies of Art: 1968 as Turning Point?” which started with a lecture by Ann Reynolds (Art and Art History, UT-Austin) titled, “Artistic Practice and New York Film Culture, 1945-1970: Toward a New Historiography of Radical Art.” Calling 1968 “a fetish” among art historians, Reynolds provided a broader history, tracing a vibrant avant-garde film culture back to the 1930s.

Next, Noit Banai (Art History, Tufts) gave her talk, “Jouissance in May 1968: The Participatory Revolution and the Public of Sensation,” which described “the new art and the new urban experience” brought about by the May 1968 Parisian revolts. Banai argued that the historic conditions of the year caused an agitation of the normative public order, leaving behind a different construction of the body.

Banai was followed by Michelle Kuo (Artforum International), whose lecture, “Inventing Experiments in Art and Technology” described collaborations between artists and engineers that enabled the breakdown of the traditional boundaries between artist and audience and added elements of uncertainty and risk to art.

The panel concluded with Tamara Levitz (Musicology, UCLA), whose talk, “The Effervescent Body in the Cyberage,” discussed student reactions to online clips of music and performance art from the 1960s. Describing Jimi Hendrix, Lindsay Lohan, and President Roosevelt as “all curiously equal on YouTube,” Levitz urges her students to reinsert the body into the act of watching. 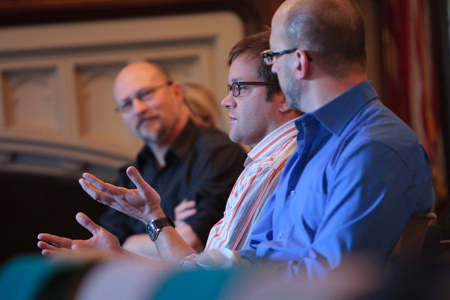 Joe Austin, Richard Langston and Robert Self participate in the final discussion

In a final discussion moderated by Sherman, participants ambitiously attempted to reach closure. Fortunately, the discussion will continue on paper, as work is now underway on a “Since 1968” book manuscript for the Center’s book series, 21st Century Studies, with Indiana University Press. The Center would like to thank Union Cinema, Union Art Gallery, Vilas Trust, and the Film Department for their help in making the conference a success.