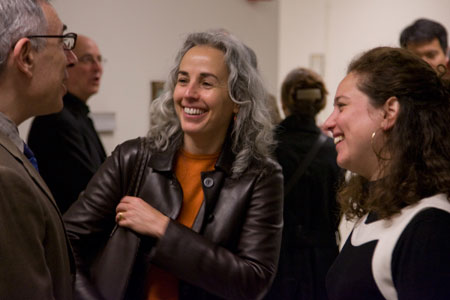 The conference continued on Day 2 with a panel discussion, “Knowing 1968: Terms of Engagement (Theory),” which began with a presentation by Judit Bodnar (History, Sociology, Social Anthropology, Central European University). In “What’s Left of the Right to the City,” Bodnar drew on the work of Henri Lefebvre to describe the Parisian revolts of 1968 as an appropriation of urban space by workers, students, and minority groups. Recounting the “spectacular counter-spectacle” of protests in Paris and Prague, Bodnar portrayed 1968 as “a moment of revolutionary spontaneity” which has left behind a framework for a radical urban imagination.

The second speaker, Rose Brewer (African American and African Studies, University of Minnesota), called for a more “robust and complex” scholarship of the time period in her paper, “1968 and the Black Radical Tradition.” Stressing the “intersectionality” of gender, race, class, and sexuality in the black radical tradition, Brewer concluded by calling the current post-Katrina era “a movement-building moment.”

Brewer was followed by Bernard Gendron (Philosophy emeritus, UWM), whose talk, “Foucault’s 1968,” described the year as “a period of severe doubt and transformation” for the French philosopher. While 1968 has been described as a “theoretical dry spell” for Foucault, it also marked his turn to politics, as he became increasingly interested in student uprisings in Tunis and prison conditions. Eventually, Foucault came to see 1968 “more as a period of rapture where a whole new horizon of politics emerged.”

The panel concluded with a talk by Richard Langston (German Studies, UNC-Chapel Hill), “Towards a Positive Dialectic: German Theory After Adorno,” which posited the “problem of the anachronistic” for German students in 1968. Calling the year a void for new theory in Germany, Langston discussed how activists appropriated texts from the Frankfurt School without reinterpreting them in the light of recent events.

The second panel, “Landscapes of Protest 1: Revisioning Image and Narrative,” first featured Martin Berger (Art and Visual Culture, UC-Santa Cruz), whose paper, “Black Power, White Power, and the 1968 Olympic Protests,” investigated white reactions to black athletes who raised their fists in protest at the Olympics. Claiming that this protest “touched on white America in ways that have not been fully explained,” Berger contrasted this defiant image with other iconic photographs that depicted African Americans as passive victims of violence. Berger called the 1968 Olympic moment “the birth of modern racial identity” in that the athletes asserted their identities as both black and American simultaneously.

In her ensuing talk, “Previously on ‘1968’: Operation Breadbasket and Iconographic Memory in Class/Race Politics,” Kath Weston (Anthropology, Women and Gender, University of Virginia) recounted her childhood experiences listening to Jesse Jackson’s radio broadcasts and described how influential these broadcasts were to both her personal development and to that of Chicago’s black communities, despite their omission in the mainstream iconographic memory.

Robert Self (History, Brown) concluded the panel with “Bodies Count: 1968 and the Body in American Politics,” which posited that the decade’s conflicts were so contentious because “destabilized human bodies were at their center.” Citing the violence of the civil rights movement and the war in Vietnam, as well as the success of the women’s rights and gay rights movements in politicizing everyday life, Self asserted that the decade “redefined the socially constructed body.”

Friday’s last panel, “Screenings: 1968, Film and Media,” was kicked off by Carol Siegel (English, WSU-Vancouver), whose talk, “Recovering Connections between Sex Radicalism and the Left: Fighting Fascism on Film in 1968 and Today,” explored the politics of the sexual revolution in recent film. Siegel declared that “sex is not the problem, it is the solution,” and revealed how several anti-war films depict “sexuality as a means of resisting totalitarianism.”

The panel then featured Fred Turner (Communications, Stanford), whose lecture, “Information Technology for Utopia,” traced the origins of cyberculture to the utopian communes of the 1960s. Using The Whole Earth Catalog as an example, Turner showed how the new communalists repurposed cold war technology and laid the foundation for the first virtual communities.

Julian Bourg (History, Bucknell) delivered the next paper, “Tempered Nostalgia in Recent French Films on les Années 1968,” which compared two recent depictions of the protests of 1968. He claimed that in the aftermath of the year, “culture won and politics lost.”

The final panelist, Mark Tribe (Modern Culture and Media, Brown), described his attempts to stage and film reenactments of important protest speeches from the decade in his talk, “Rhetorics of Resistance: Protest Speech, Public Space, and the Public Sphere.” The day concluded with a screening of a series of six short films by Tribe called Port Huron Project.