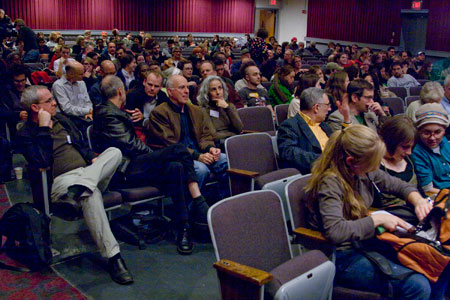 This fall the Center welcomed an interdisciplinary group of scholars and artists from across the globe for a major three-day conference commemorating the fortieth anniversary of the Center’s founding. The conference, Since 1968, explored the wide-ranging impact of the year and its aftermath on politics, theory, the arts, and international relations and was organized by Jasmine Alinder (English, UWM), Aneesh Aneesh (Sociology, UWM), Kumkum Sangari (Vilas Professor of Humanities, English, UWM), Daniel J. Sherman (Art History, UNC-Chapel Hill) and Ruud van Dijk (History, University of Amsterdam). With the exception of the keynote speakers, participants did not read papers, but rather were allotted fifteen minutes to present their thoughts on a precise topic within the rubric of each roundtable.

The conference kicked off to a capacity crowd at Union Theatre the evening of Thursday, October 23, with screenings of newly re-mastered editions of Fuses and Meatjoy, two iconic films from the 1960s by Carolee Schneemann. In a keynote address that spanned her nearly half-century career, Schneemann described her early encounters with a misogynistic art world and her assertion that the body can be both image and image maker. She also explained that her aim, was, in part, to “posit erotics and intimacy against the militaristic aggression of American involvement in Vietnam, Cambodia, and the Dominican Republic.” Bookmarking her lecture was an image of a more recent but equally controversial work, Terminal Velocity, a series of photographs of people falling from the World Trade Center on September 11, 2001. Speaking of the work in the ensuing discussion, Schneemann said that it memorializes victims and “questions American mythologies of righteousness and invulnerability.” 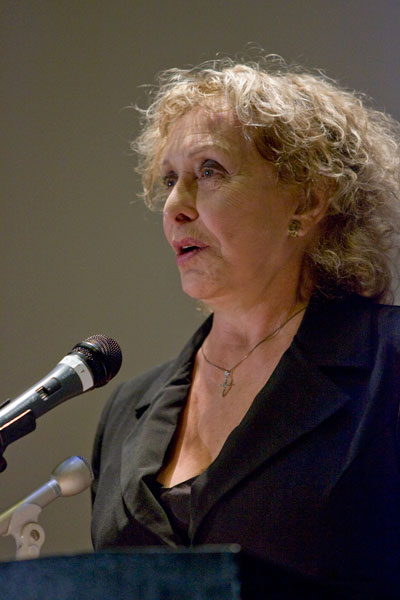