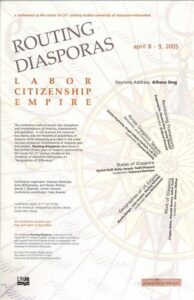 When in 2003 the Center launched the first two-year research theme in its history, we hoped that faculty fellows from the first year would have the opportunity to contribute to Center activities during the second. We not only met this objective, but far exceeded it thanks to three fellows from 2003-04, Sukanya Banerjee (English), Aims McGuinness (History), and Steve McKay (Sociology). During their fellowship year, they generated the concept for the path-breaking international, interdisciplinary conference Routing Diasporas: Labor, Citizenship, Empire, and agreed to serve as its organizers.

The conference was held April 8 and 9, 2005 at the American Geographical Society library at UWM, a most congenial and fitting venue, enhanced by an exhibition, “People on the Move,” which Jovanka Ristic of the AGS library curated especially for the conference. An audience of over 70 participated. In addition to the organizers, who each served as discussant for one panel, the conference also featured 2003–04 Center fellows Kristin Espinosa (Sociology) as a presenter and Andrew Kincaid (English) as a discussant.

After welcoming remarks by Center director Daniel Sherman, the opening panel, with papers by Engseng Ho (Anthropology, Harvard), Parama Roy (English, UC-Riverside), and Jenny Sharpe (English & Comparative Literature, UCLA) underscored the urgency of rethinking diasporas as ongoing life passages. Ho did so by discussing how early 20th century Arabs from Yemen living in various places around the Indian Ocean pulled the British imperial state into a cooperative relationship; Roy by emphasizing the role of “banalities” in the formation of colonial scapes; and Sharpe by reading recent texts by Edwige Danticat and Caryl Phillips as remapping the Middle Passage in ways that defy easy culpability.

The second conference day began with a panel that included Martin Berger (Art History, UC Santa Cruz), Shelley Streeby (Literature, UC San Diego), and Julie Greene (History, Colorado). Berger discussed what he called the “imperialism of whiteness” in the mid-to-late 19th century through a careful decoding of the valances of Orientalist styles in museum architecture. Shelley Streeby drew parallels between representation of immigrant soldiers during the Mexican War of the 1840s and so-called “green card soldiers” today to investigate the issue of “imperial citizenship.” Greene addressed the same theme, but from the perspective of white American workers during the construction of the Panama Canal. The first Roosevelt administration’s efforts to keep these workers—and citizens—happy turned them into representatives and enforcers of United States empire, she argued.

The morning concluded with the keynote address by Aihwa Ong (Anthropology, Berkeley): a wide-ranging discussion of the way technology today “de-territorializes” prosperity in today’s global economy, for example through outsourcing. The first afternoon panel on“The Work of Diaspora” featured three rich papers focusing on different historical and geographical time periods, all emphasizing the need for multi-lingual research in a wide array of sources to do justice to both historical context and to the particular roles of diasporic workers. In a paper co-written with Marina Carter (South Asian Studies, Edinburgh), Crispin Bates (History, Edinburgh) suggested the importance of considering historically the role of kinship networks as a source of worker agency in the colonial Indian labor diaspora; Donald Nonini (Anthropology, University of North Carolina-Chapel Hill) investigated the complexities of class formation among Chinese Indonesians in Australia; and Julius Scott (History, Michigan) discussed the sense of trans-national possibility that arises from considering the maritime dimensions of the Haitian Revolution. The final panel examined the role of technology today, especially, as discussant and current Center fellow Thomas Malaby (Anthropology) noted, its impact on traditional constraints and possibilities for identity and network creation. Kristin Espinosa (Sociology, UWM) illustrated the multiple types and functions of the web pages established by Mexican towns and migrants from them in the U.S.; Angel Adams Parham (Sociology, Loyola, New Orleans) discussed the use of the web to construct both virtual and face-to-face diasporic communities, many of them with distinct protocols of belonging; and Lok Siu (Anthropology, New York University) presented her fieldwork on narratives of self-identity among members of the Chinese community in Panama.

The conference format, with pre-circulated papers and panel presentations limited to 10–15 minutes, proved extremely successful. Not only did conference participants—both speakers and audience members—develop new professional contacts, but after every panel the forty-five minute time slot allotted for discussion proved to be too short. In practice, as participants referred back to earlier sessions, each discussion period served to launch multiple, productive conversations during breaks, receptions and over dinner each evening.