Picturing the Modern: Photography, Film, and Society in Central Europe, 1918-1945

In April, the Center renewed its collaboration with the Milwaukee Art Museum by way of co-hosting a two-day symposium connected to the exhibition Foto: Modernity in Central Europe, 1918-1945. Under the title of Picturing the Modern: Photography, Film, and Society in Central Europe, 1918-1945, the event, organized by Center director Daniel J. Sherman and Lisa Hostetler, Associate Curator of Photographs at the Museum, attracted significant interest from a diverse group of individuals from the greater Milwaukee area.

The symposium began on Thursday, April 3, in the Milwaukee Art Museum’s Lubar Auditorium with a keynote address by Anson Rabinbach (History, Princeton): “Antifascism, Photomontage and the Image of Nazism.” Rabinbach focused on the circumstances surrounding the publication of the Braunbuch, which blamed the Nazis for the 1933 Reichstag fire, as an example of how the correlation of Nazism and anti-fascism was promoted throughout the world. He argued that the Braunbuch, widely distributed in multiple languages, was the prism through which most people saw Nazi Germany for a generation, and that its narrative of Nazi conspiracy, blackmail, sexual deviance, drug addiction and general brutality was at the core of anti-fascism. Only when Der Spiegel ran a five-part series by Fritz Tobias in the early 1960s were the Braunbuch’s conspiracy theories exposed as fabrications, and a consensus emerged that a lone arsonist set the fire. Rabinbach concluded his presentation by analyzing John Heartfield’s photomontages that appeared on the dust jacket of Braunbuch, suggesting that they contributed to the book’s commercial success.

The symposium resumed on Friday morning. In his presentation “Circa 1930: Art History and the New Photography,” Matthew Witkovsky (National Gallery of Art), curator of the Foto exhibition, argued that art history’s close entanglement with photography began in the 1930s and that many of the starting suppositions that inform their relationship have endured. As he stated, “The new photography of 1930 was art history by other means.” He referenced several commercial art history and photography texts from the 1930s, several of which identified photography as a “medium,” a new use for the term in reference to photography. 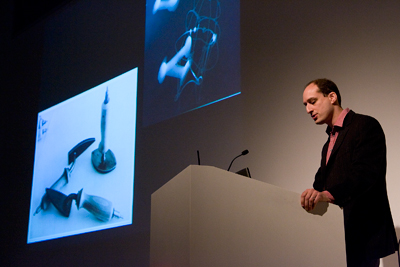 The second speaker on Friday morning was Elizabeth Otto (Visual Culture, SUNY Buffalo), who presented a paper entitled “A ‘Schooling of the Senses’: Visual Experiments, Gender, and the Photomontages of László Moholy-Nagy and Marianne Brandt.” Otto examined Bauhaus luminary Marianne Brandt’s public work in metal, her private work with photomontages, and her personal relationship with Moholy-Nagy. Otto chronicled Brandt’s public career, including her background as a painter, metalsmith, and (for a year) head of the male-dominated Bauhaus Metal Workshop, but focused on recently discovered, never before exhibited, photomontages (45 to date). According to Otto, Brandt’s photomontages can be read as a visual dialogue with Moholy-Nagy and his teachings. 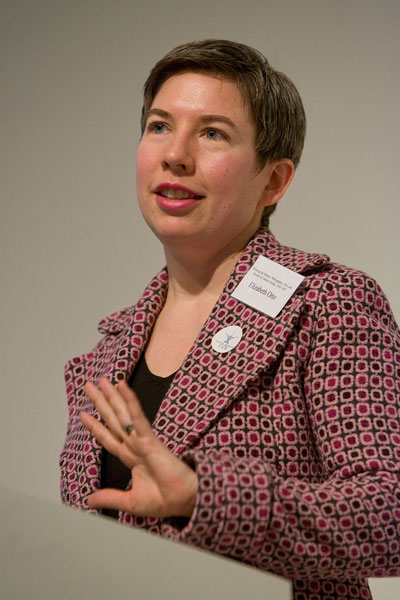 The final speaker on Friday morning was Petr Szczepanik (Film Studies, Masaryk University, Brno, Czech Republic). In his paper, “Modernism, Industry, Film: A Network of Media in the Bat’a Corporation and the Town of Zlín in the 1930s” he took a different approach from film historians in the Czech Republic, who present avant garde artists in Zlín, many of whom are included in the Foto exhibition catalogue, within a history of the progress of film and nationalized cinema. Instead, Szczepanik looks at the contributions of the Bat’a shoe company and the town of Zlín in relation to avant garde art. What, he asks, do the modern organization of work and aesthetics have in common? Szczepanik presented detailed original research about the symbiotic development of Zlín’s city planning and of Bat’a corporation’s industrial standardization. Szczepanik argued that Bat’a organized the private life and social welfare of its employees through its media network and surveillance, both of which also played a central role in the creation of the new Industrial Man. 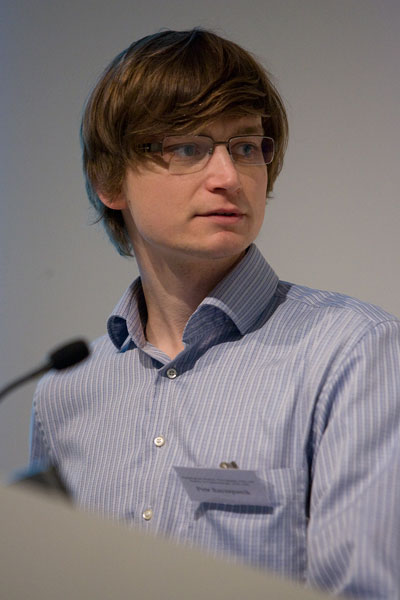 After lunch and a viewing of the Foto exhibition, the afternoon session began with a presentation by David Frey (History, West Point) entitled “Dream Cars and Dancing Dandies or Peasants Who Feared Tractors? Competing Conceptions of Modernity in 1930s Hungarian Film.” Frey looked at two opposing film trends from Hungary in the 1930s to illustrate the complexities of modernity in interwar central Europe. One trend, that of the urbane, cosmopolitan and internationally flavored comedy, embraced all things modern, yet also undermined the process of modernization by constructing an ideal that could never exist in the context of actual Hungarian culture and politics of the time. A second type of film, set in traditional, peasant, and agrarian Hungary, equated these rural landscapes and activities with national identity—thereby setting itself in opposition to an obtrusive and alien modern—yet still managed to undercut its opposition through various common plot lines that ultimately supported modernization efforts.

On both days, a diverse audience of academics and community members eagerly engaged the presentations, making for several animated discussions. The possibility for all symposium participants to view or revisit the Foto exhibition in conjunction with the symposium enhanced the experience of both.