Past Knowing / Future Knowledge: Archaeology and Museums in the 21st Century

On Friday, October 12, the Center convened a symposium on the traffic in looted objects around the world and museums’ responsibilities in this situation. Five panelists and an audience of nearly 80 discussed issues concerning the loss to knowledge from looting of archaeological sites, the repatriation of looted artifacts to the countries of origin, and how museums are responding to these challenges. The panel was comprised of archaeologists, museum professionals and an expert on the legal aspects of the trade in archaeological artifacts and works of art. 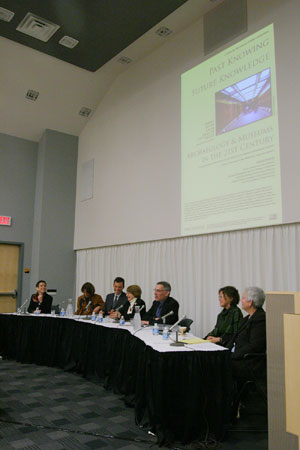 Following introductory remarks by the symposium co-chairs, Daniel Sherman (History and Center director) and Jane Waldbaum (past president of the Archaeological Institute of America [AIA] and Art History emerita, UWM), the first panelist to speak was Carla Antonaccio (Classical Studies, Duke). Antonaccio began by emphasizing the vital role context plays in producing knowledge of the past and why it is important to protect such contexts. She argued that when sites are looted “it’s like tearing pages from a book,” resulting in the irreplaceable loss of collective human knowledge. Critics of repatriation argue that a lack of proper facilities, as well as a shortage of equipment, funding, and staff in some countries puts objects at risk. In contrast, Antonaccio believes that the increased attendance at sites such as Morgantina in Sicily will provide the resources to address these critics’ concerns.

The next panelist, Susanne Ebbinghaus (Harvard University Art Museums), began by discussing the Mesopotamian site of Nuzi in modern Iraq, where extensive excavations in the 1930s led to the discovery of thousands of clay tablets inscribed with Akkadian cuneiform script. So many tablets were found that archaeologists reportedly destroyed many they considered superfluous. This case highlights the difficulties of preserving cultural remains, particularly when “preservation is not cheap and political bodies are fickle partners in the protection of sites.” The effectiveness of the 1970 UNESCO Convention in regulating the traffic in antiquities remains under dispute, but Ebbinghaus believes that most museum professionals have taken seriously the message that collecting unprovenanced artifacts perpetuates the black market.

Geoff Emberling (Oriental Institute Museum, University of Chicago) discussed two traditional museum models: object-based and knowledge-based. While cautioning that this dichotomy tends to be overdrawn, he described the former approach as generally the prerogative of art museums, while the latter model is more often the modus operandi of archaeology and history museums. To highlight this point, he discussed his past curatorial experience at New York’s Metropolitan Museum, where artifacts were often displayed in isolation and with minimal text in the exhibition galleries. In contrast, the acquisition and exhibition approach at the Oriental Institute Museum is decisively knowledge-based. Emberling argues that the approach stems from the Chicago museum’s mission as an inactive-collecting institution, a mission that reduces the pressure to accept objects without context while “attracting donors who are genuinely interested in research.” In order to overcome this museum dichotomy, Emberling argued for an “inclusive knowledge-based model” as the best approach to museology and education.

Virginia Fields (Los Angles County Museum of Art) addressed the misinformation that exists among the general public about archaeology, particularly about the ancient Maya. In this regard, museums stand at “the nexus between the academic world and the public,” making them a forum for presenting accurate and relevant information about the past. On the issue of repatriation of looted artifacts, she emphasized that international collaboration between cultural institutions can result in better preservation and presentation methods, citing her own work with museums and archaeologists in Latin America as an example.

The final panelist, Patty Gerstenblith (Law, DePaul University), began by retracing the history of museums and archaeology from the nineteenth-century heyday of antiquarianism to the exponential growth in the appetite for acquiring collections, regardless of provenance, following World War II. Many sites were destroyed by clandestine looting, as artifacts were traded up the line, many ending up in museum collections. To account for how the traffic in unprovenanced objects continues to influence acquisition policies, she pointed to several justifications commonly used by certain museums to acquire undocumented artifacts. Gerstenblith concluded on a skeptical note, by asking if the future of collecting unprovenanced material will be different from the past, and increased international cooperation will lead to museum acquisitions only of well-provenanced artifacts, or whether in thirty years we will be engaged in discussions similar to the current ones.

A lively discussion followed the presentations, initiated by the co-chairs and with challenging questions posed by several audience members. The entire symposium was recorded, and an edited transcript will be available in the Center’s electronic working paper series.