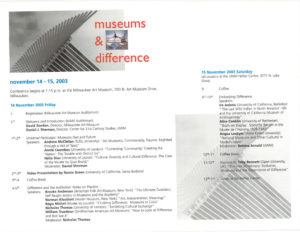 Curators, scholars, students, and museum-goers from across the region, and as far away as New York, congregated in Milwaukee for the Center’s major annual conference, “Museums and Difference,” on November 14 and 15. They joined a distinguished group of speakers from around the U.S. and Europe for a day and a half of intense, lively discussion of the ways various categories of human difference shape, and are shaped by, the display practices, programs, and institutional politics of museums and related venues such as trade shows and worlds’ fairs. The conference began on Friday afternoon in the Marianne and Sheldon B. Lubar Auditorium at the Milwaukee Art Museum, where participants were welcomed by the museum’s director, David Gordon, and continued all day Saturday at UWM’s Hefter Center. 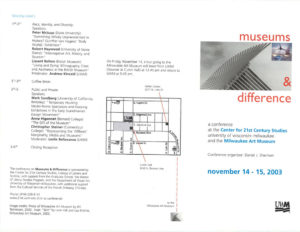 Highlights of the conference included Friday afternoon’s round-table discussion on current museum practice moderated by Nicholas Thomas, the well-known scholar and critic of Oceanic art and culture, with remarks from Régis Michel of the Louvre, Norman Kleeblatt of the Jewish Museum, Brooke Anderson of the American Folk Art Museum, and William Truettner of the Smithsonian American Art Museum. The conference key- note speaker Saturday morning, Tony Bennett, considered the contribution of the museum to social and scientific discourses regulating difference, with special reference to Victorian Britain. Papers, which were pre-circulated to allow for maximum discussion and exchange at the conference, covered such topics as the project for a new museum of non-Western art in Paris (Nélia Dias), the difficulty of establishing a museum of “other” cultures in Japan (Angus Lockyer), a new cross-cultural exhibition at the British Museum that strives to bridge the arts and ethnography (Lissant Bolton), the controversial “Body Worlds” exhibitions in contemporary Germany (Peter McIsaac), and museums based on the personal taste (Anne Higonnet) or off-beat sensibilities (Christopher Steiner) of their patrons. Current and former Center fellows Bettina Arnold, Leslie Bellavance, and Andrew Kincaid, as well as director Daniel Sherman, provided comments to orient the discussion at each session. Attendance was strong throughout the conference, approaching 90 at the museum and ranging from 60 to 75 at the Hefter Center. A book growing out of the conference papers is now in preparation. 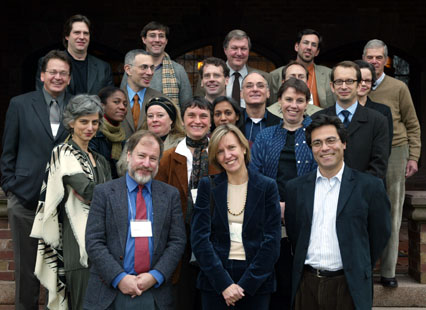 The conference concluded with a brief tribute to Center executive director Carol Tennessen, who retires in June. This conference, like so many others before it, benefited from her tireless efforts and superb organizing skills. Many of the speakers thanked her and the Center’s staff for their hard work in making the conference run so smoothly.

Vicki Callahan (UWM) wrote, “that was a wonderful conference with a great mix of folks — I haven’t seen such a diverse group of academics at an event here in the two years I have been at UWM. . . . congratulations on a really interesting (and well run) event.”
Center fellow Aims McGuinness found the conference “easily the most rewarding event of its kind that I have encountered since I first set foot in Milwaukee . . . . The Hefter Center (and I’m sure the Museum as well) has rarely (if ever) seen such smarts—and such numbers.”
Lissant Bolton wrote, “I enjoyed the conference greatly, and it gave me some things to think about, which is what one wants from such an occasion.”
Régis Michel called the conference “magnifique,” adding, “The most difficult thing is to manage to create an atmosphere, which you succeeded so well in doing . . . It’s very rare in such events to be able to communicate so freely and extensively.”
And Nélia Dias thought the event “a success from every point of view: the choice of speakers, the papers presented, the discussions, and all the care taken to make the conference a very agreeable and sociable space.”