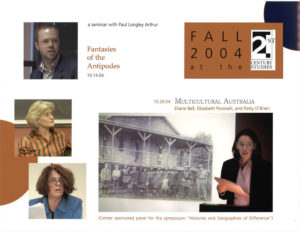 On Friday October 29, as part of a larger, three day symposium entitled “Histories and Geographies of Difference: Australia and America,” (conceived by UWM Vilas Professor Emeritus Ihab Hassan, and cosponsored by the Center and UWM’s Center for International Education) we turned our attention to Australia. The afternoon began with a panel examining “The Writer’s and Artist’s Perspective.” Chaired by Patrice Petro (English and CIE) the panel consisted of Ihab Hassan, “Views of the Void: Painting a Continent;” Nicolas Jose (Sydney), “The Dreaming and the Dream: Australia and America;” and Chris Wallace-Crabbe (Melbourne), “Slouching toward the Nightmare of History.”

The Center-organized panel, “Multicultural Australia,” focused on Australia’s relationship with indigenous peoples under its control from the late nineteenth century to the present. Speakers were anthropologists Diane Bell (George Washington) and Elizabeth Povinelli (Chicago), and historian Patricia O’Brien (Georgetown). Starting off, Bell presented an open letter addressed to Australian prime minster John Howard. She pleaded for a new look at Australia’s relations with ethnic minorities, Australia’s ethnic make-up, and federal policies on immigration and refugees. Patricia O’Brien followed with an historical study of Australian colonialism in Papua New Guinea, for which, she argued, United States expansionism in the Pacific served as a model. Under the influence of a rising Japan in the second quarter of the twentieth century, Australia’s approach evolved from a “benevolent colonialism” to a systematic integration of its “Brown Pacific” with national economic and defensive systems.

Finally, Elizabeth Povinelli examined, in the context of current international politics and indigenous rights issues, the rise of what she called “belligerent democratic nationalism” as represented by the “shameless state.” Rejecting the relevance of the past and the need for amends, the shameless state seeks to “liberate” the present and future from the past and move toward “closure.” Instead, Povinelli argued, a relentless orientation toward the future prevents a genuine recognition of the other and a coming to terms with an historically rooted subordination. 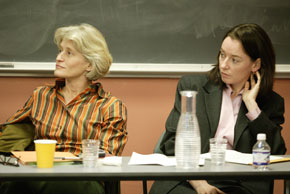