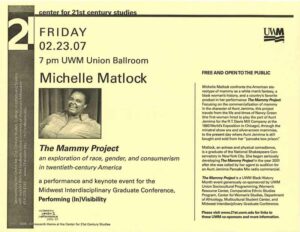 During the spring 2007 semester the crowds at Center events were not only sizeable, as is usually the case, but they also were very diverse, with very significant representation from beyond the UWM campus. Partly responsible for this were two performances we organized in connection with our 2006-07 theme of “Autonomy, Gender, and Performance.” While very different, both projects could be seen as addressing all elements of our research theme in serious and thought-provoking ways. At the same time, it is clear that both Michelle Matlock (The Mammy Project) and Elizabeth Whitney (Wonder Woman: The Musical) appealed to a much wider audience than simply academics.

Organized in collaboration with the UWM Student Union’s Sociocultural Programming and presented as the keynote to the Second Annual Midwest Interdisciplinary graduate Conference (organized in collaboration with the Center by UWM graduate students), The Mammy Project drew about 150 people to the Union Ballroom on Friday, February 23. On a warm spring evening two months later, Friday April 20, with two other theater events on campus and the popular Gallery Night underway in the city of Milwaukee, we were also very gratified by the 50-60 person crowd for Wonder Woman: The Musical.

Matlock, a graduate of the National Shakespeare Conservatory in New York City, explained that she seriously began developing The Mammy Project in 2001 after she was called by her agent to audition for an Aunt Jemima Pancake Mix radio commercial. Prior to that experience, she had strenuously resisted roles that purportedly “fit” her appearance. But the Aunt Jemima audition caused her to embrace the character as a way to confront the American stereotype of mammy as a white man’s fantasy, a black woman’s history, and a country’s favorite product. 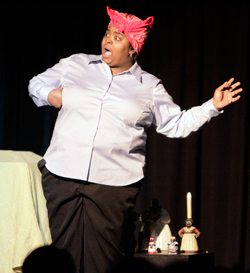 Focusing on the commercialization of mammy in the character of Aunt Jemima, The Mammy Project traveled from the life and times of Nancy Green (the first woman hired to play the part of Aunt Jemima for the R.T. Davis Mill Company at the 1893 World’s Exposition in Chicago), through the minstrel show era and silver-screen mammies, to the present day where Aunt Jemima is still bought and sold from her “pancake box prison.” With Matlock playing all the characters in the stories—including Nancy Green at various points in her life, and herself, often as commentator—the lively performance was able alternately to provoke and amuse, but always engage the audience.

During the “talk back” following the performance, many audience members joined a discussion that not only touched on the making of this particular project but also examined several of the larger issues raised by The Mammy Project. For example, Matlock and the audience discussed the continued use of racially stereotyped characters in advertising today and whether we can consider it progress that the “Uncle Ben” character will now be used as the CEO of his company, rather than a worker. The discussion continued in the more informal setting of a reception in the Union’s Fireside Lounge. Michelle Matlock’s performance was co-sponsored by the Department of Africology, the Union’s Women’s Resource Center, the Union’s Multicultural Student Center, and UWM’s Comparative Ethnic Studies Program. We especially want to thank Alice Jackson and Brandon James of the UWM Student Union for their help in organizing the event.

Michelle Matlock as Nancy Green in The Mammy Project

Elizabeth Whitney, too, could be seen, to paraphrase a 2006-07 Center fellow, as a performer whose roles seem to be determined by the way she looks—to her disgruntlement. Just like Matlock, Whitney has used this to create performances that undermine, in her case, gender stereotypes. Just like, for example, her barbie project, Wonder Woman: The Musical addresses issues of gender, sexuality, and popular culture in post-World War II America. 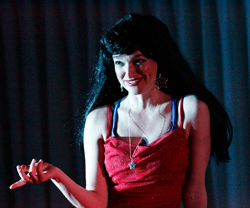 An avid viewer of the original Wonder Woman television series in the 1970s, Whitney explains on her website that she conceived of this performance a few years ago, after watching the pilot episode of the show. She found herself “shocked at the excessively careful liberal feminist approach that the show took, where Wonder Woman herself seemed never to be claiming more than reciprocal attention in the workforce—and as a secretary embarrassingly in love with and subservient to her (male) boss!” Ultimately, Whitney argues, the original Wonder Woman series relays a caution against radical feminism: whereas a little bit of independence is fine, ultimately women should take care with the amount of power they exercise, especially around men. 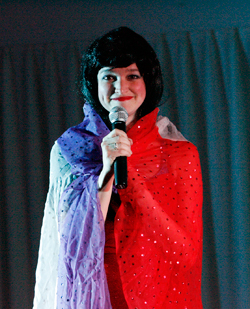 Wonder Woman: The Musical is Whitney’s attempt to make sense of 1970’s lesbian feminism, separatism, and superheroines as cultural icons. Performed in a campy narrative style characteristic of her work, the show opened with a narrative reflection (told by Whitney’s second grade self) on her adolescent adoration of Wonder Woman. The piece then transitioned into the “current tour,” with Whitney, now appearing as a nightclub/karaoke singer, preforming cover songs such as Helen Reddy’s famous “I am Woman,” and Tammy Wynette’s “Stand by Your Man.” Whitney’s Wonder Woman reflected on her close friendship with Major Steve Trevor and the homophobia of the military, lessons in coalition building, gender essentialism, and subsequent alienation from Paradise Island. Regularly venturing off the stage to interact with the audience, Whitney also shared fan letters, and responded with eloquence to the inevitable questions concerning her cleavage, affairs, and the invisible plane.

This program, too, included a discussion session, followed by a reception at the Center. These additional gatherings first and foremost were opportunities for audience members to examine with Whitney aspects ofand ideas behind Wonder Woman: The Musical. In light of Whitney’s time spent at UWM between 2002 and 2004, however, they also served as venues for several members of the Milwaukee and UWM communities to renew their friendships with the artist (and, we should add, her partner, Lea Robinson, former assistant UWM women’s basketball coach).