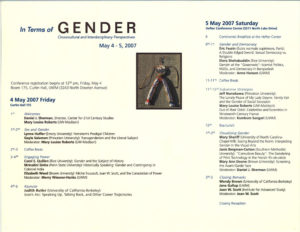 On Friday and Saturday, May 4 and 5, the Center welcomed an international group of scholars from a variety of fields to UWM for its major, two-day conference for 2006-07. The conference grew out of discussions among friends, colleagues, and former students of Joan W. Scott about how to honor her pioneering work in gender studies and feminist theory. Organized by Daniel J. Sherman (History, Center Director) and Mary Louise Roberts (History, UW-Madison) in close consultation with Professor Scott (Social Science, Institute for Advanced Study), the conference sought to be prospective rather than retrospective in spirit, a survey of the place of the term “gender” in a number of disciplinary settings with a view to the challenges it might continue to pose to scholarly inquiry in the future. The conference, which featured brief presentations on pre-circulated papers, as well as a keynote and closing round-table, generated consistently high turnout and lively discussion throughout. 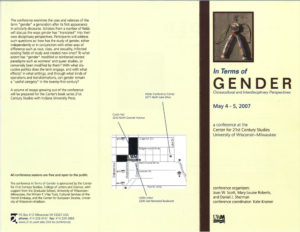 The meetings kicked off early Friday afternoon with papers by Lynne Huffer (Women’s Studies, Emory University) and Gayle Salamon (English, Princeton University). Huffer presented a paper entitled “Foucault and Feminism’s Prodigal Children.” Central to this project was Huffer’s exploration of the original French edition of Michel Foucault’s 1961 History of Madness. Translations of this work have long been based on an abridged version of the French original, Huffer reminded the audience, keeping readers from fully appreciating its arguments. Huffer proposes an ethical project that can speak to queers and feminists alike and may “expand Foucauldian conceptions of sexuality to encompass the problems of lived experience in relation to our historical and political present.” In her paper, “The Sexual schema: Transposition and Transgenderism in the Phenomenology of Perception,” Salamon argued for a re-engagement with philosopher Maurice Merleau-Ponty’s 1945 work by the same name as a useful vehicle to understand trans-sexual embodiment. “In Merleau-Ponty’s work,” Salamon argued, “there is something essentially ambiguous in sexuality.” This ambiguity, according to Salamon, “can become the means for understanding bodies, lives, and especially relationality outside of the domains of male or female.

”The second panel, “Engaging Power,” first featured Carol Quillen (History, Rice). Her paper, “Gender and the Subject of History,” sought to think through the implications of the entanglement of “conceptions of the subject and the methods through which historians produce and represent knowledge.” Focusing on the rise of humanism through a 1345 letter from Francesco Petrarca to Cicero, Quillen emphasized the potential usefulness of feminist and post-structuralist theory to “imagine the relationship between an historian and the past not as one between an observer and an object of study, but rather as one between or among subjects.” More than working within a scientific framework, the historian should draw on ethics in doing so, she argued, urging her colleagues to understand their work as entailing obligations both to those they write about and to their readers. In a paper entitled “Historically Speaking: Gender and Citizenship in Colonial India,” Mrinalini Sinha (History, Penn State) sought to consider the value of the concept of gender—arguably a European notion—for the interpretation of colonial Indian history, and vice versa. She did so through the significant traces she found of liberal notions of citizenship in early Indian feminism. Sinha argued that the “language of citizenship-based individual rights” in Europe and colonial India, however partial and context-specific, and its history in both places can offer a new framework for understanding individual rights in terms at once gendered and universal. Elizabeth Weed (Modern Culture and Media, Brown) examined critics and critiques of Joan Scott’s 1984 article “Gender: A Useful Category of Historical Analysis.” Professing herself “mystified” by certain vehement reactions to Scott’s article, Weed argued that these really targeted the promotion of “theory” in historical scholarship, and particularly the work of Michel Foucault. For Weed, Scott’s arguments do not disable history but, with critique at their core, instead open it up to many new avenues of investigation.

The conference’s first afternoon concluded with the keynote address by Judith Butler (Rhetoric and Comparative Literature, UC–Berkeley) entitled “Joan’s Arc: Speaking Up, Talking Back, and Other Career Trajectories.” In analyzing the reasons for Scott’s importance for many academic disciplines, Butler discussed her own reliance on Scott, as a constant interlocutor. Scott’s early work drew wide attention with its focus on questions of causality and agency, and especially the role of women in history. Moving on to the relevance of Scott’s scholarship for, and Scott’s own interest in, present-day questions, Butler focused on Scott’s writing on the 1978 Sears sex discrimination case. Of central importance here is Scott’s view that if sexual difference is contingent and contested it can also be changed. Also compelling, Butler continued, is Scott’s argument for (sexual) equality that depends on difference. Butler concluded with a discussion of Scott’s long-standing support for freedom of academic speech, reminding the audience that for Scott the contest of ideas is key—not their resolution, and not necessarily balance. The standing room-only audience contributed to an extended discussion, covering many of the themes of Butler’s talk.

The conference resumed at UWM Hefter Conference Center on Saturday morning. Éric Fassin (Sociology, École normale supérieure, Paris) presented a paper explaining how, under the influence of several socio-political controversies, recent French debates on gender have maintained (or developed) a vibrancy missing nowadays from discussions in the English-speaking world. Fassin’s particular interest is in the intersection of gender and race in contemporary French debates, most prominently on the veiling of Muslim women in public spaces. The second speaker, Elora Shehabuddin (Humanities and Political Science, Rice) also addressed contemporary issues, in a paper entitled “Gender at the ‘Grassroots’: Islamic Politics, NGOs, and Democracy in Bangladesh.” She explained how leaders of the Bangladeshi Jamaat-i-Islami (Society of Islam) employ a maternalist discourse strategically, to counter claims made by Western NGOs that Islam has harmed women, rather than to confine women to domestic roles. Specific to a country with a thriving democratic tradition, Jamaat-i-Islami makes clear the value of gender analysis to dispelling simplistic Western notions of a “clash of civilizations.”

The next panel, “Subversive Strategies,” featured papers by Jeff Nunokawa (English, Princeton) and Mary Louise Roberts. Nunokawa’s paper, “Feminizing Reification: The Case of Dickens,” took up “the presentation of the self in reified form” in the work of Charles Dickens, especially in female characters. Nunokawa noted that signifiers of femininity—or female subjects—are almost always part of what he labeled “moments of awayness,” or symbols of failed agency. Roberts’s presentation featured two late 19th-century French artists and celebrities, Sarah Bernhardt and Rosa Bonheur. Eccentricity for these two women, Roberts argued, was a strategy of subversion against conventional bourgeois gender roles. Viewing eccentricity this way clarifies both its force and its limits because eccentricity operated at an individual, not a social, level. As such, it did not represent a serious threat to established social norms. In this sense, Roberts concluded, “eccentricity was its own worst enemy.”

The last session of pre-distributed paper presentations examined the work of gender in visual studies, broadly construed. Daniel Sherman began by summarizing the paper by Mary Sheriff (Art History, North Carolina-Chapel Hill), who could not attend in person. Sheriff’s paper traced the role and impact of feminist analysis in art history, noting its long preoccupation with the role of women artists, and their exclusion from the canon, rather than with gender as such. Despite the lack of a decisive theoretical intervention in the field, Sheriff argued that feminist theory could have an impact on scholarship in art history, most productively by fusing critique with careful attention to historical context. Janis Bergman-Carton (Art History, Southern Methodist University) followed with a paper entitled “‘Convulsive Beauty’: The Gendering of Print Technology in the French Fin-de-Siècle.” The paper examined the possible origins and functions of “unlikely couplings of printing presses and erotically charged women” in French advertising material and decorative arts of the Belle Epoque. In the final presentation, Mary Ann Doane (Modern Culture and Media, Brown) focused on the cultural force of representations of the (female) face in its role as a screen and as a medium between viewer and filmmaker. In particular, she raised questions about the relationship between aesthetics and politics in feminist film theory.

The closing discussion featured commentary by Joan Scott, who also served as chair, Jane Gallop (English, UWM) and Wendy Brown (Political Science, UC-Berkeley). Brown expressed concern about the rise of ethics at the expense of politics (with its preoccupation with power and potential for change) in academic discourse, while Gallop wondered about the risks when gender becomes established within institutional academic hierarchies. In conclusion, Scott argued that gender remains a “useful category of analysis,” as long as it does not become a prescriptive list of questions scholars tick off in lieu of more probing, contextual inquiry. Participation from many of the conference speakers and from a diverse group of participants from the UWM and the wider Milwaukee community made this closing session an especially lively one.