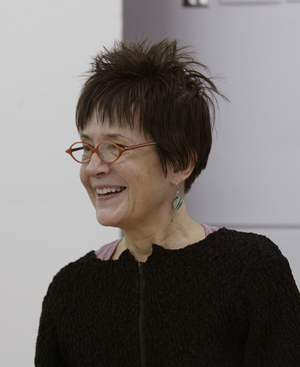 On Friday, November 16, architectural historian and PBS “History Detective” Gwendolyn Wright (Architecture, Columbia) visited the Center to deliver a lecture entitled: “Excavating American Modern Architecture.” Wright’s talk had as its central theme the importance of a historical and interdisciplinary perspective for forward-looking architecture.

Noting that this view is not universally accepted in the field of architecture, Wright used both the Center’s interdisciplinary mission and its current research theme, Past Knowing, to argue that in order to understand an increasingly complex, integrated world and to make decisions about places with many diverse traditions and histories, architects need to know many disciplinary languages, including architectural history. She then proceeded to analyze, and deconstruct, the notion of “modern architecture.” While there exist competing views of what constitutes modern (including modern architecture), according to Wright, the historical, geographical, and ideological complexities connected with the term are not always sufficiently recognized. Questioning modern architecture in reality involves the questioning of modernity, Wright argued, and this theoretical exercise is an important part of learning what modern architecture actually involves. 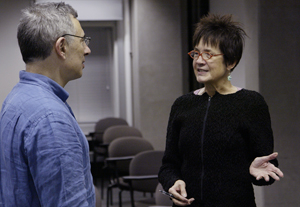 The study of modern architecture, Wright argued, requires a critical, historically informed engagement with complexity and diversity. Five themes in particular stand out, according to Wright, when “excavating” American modern architecture: hybridity; the impact of commercial culture; economic growth and ethnic diversity; the power of media as a means to disseminate new architectural ideas; and the extent to which architecture has engaged with its surroundings and the wider public. “There is always more going on than one would think following large labels,” she concluded.

The Center welcomed a capacity crowd of approximately 120 at UWM’s school of Architecture and Urban Planning, co-sponsor of the event, with many staying after the end of the formal program to engage Professor Wright with questions and comments.