“Poetry as Archive: a History of Romanticism” 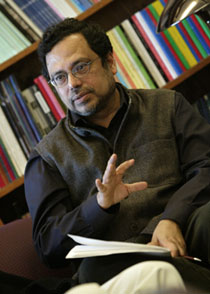 Eminent scholar Dipesh Chakrabarty presented a talk entitled “Poetry as Archive: A History of Romanticism” to an attentive audience of around 30 at the Center on April 2. A founding member of the Subaltern Studies Group and the Lawrence A. Kimpton Distinguished Service Professor at the University of Chicago, Chakrabarty is widely acclaimed for his work on liberal theory, nationalism, and modernity, especially as they relate to questions of historiography.

Focusing on the ways in which literature operates as a site for articulating or formulating the “spirit” of the nation, Chakrabarty’s talk at the Center dwelled on the historical and political significance of literary genealogies. With reference to India, especially Bengal, he argued for the ways in which strands of nineteenth-century European Romanticism informed a vernacular literary tradition that had tremendous purchase in negotiating between individual and collective subjectivities. He pointed out that the death of romanticism in many ways also marked the death of vernacular literature. Suggesting that in an era witnessing the globalization of English we need to redirect our attention to the role of vernacular traditions, Chakrabarty’s talk raised important questions about the possible relationship between vernaculars and the Left in addressing contemporary global politics.