When in academic year 2002-2003 the Center asked UWM faculty for names of possible speakers in connection with its new theme, Geographies of Difference, geographer David Harvey, Distinguished Professor of Anthropology at CUNY graduate Center, appeared on many lists. It was with considerable anticipation, therefore, that we welcomed Professor Harvey last October to the UWM campus.

On the first day of his visit, October 13, Professor Harvey participated in a lively seminar at the American Geographical Society collection in the Golda Meir library with Center Fellows, UWM faculty, graduate students, and members of the community. A chapter from Harvey’s Spaces of Hope had been distributed as advance reading. The discussion ranged widely, with considerable attention devoted to Harvey’s involvement with Baltimore’s living wage campaign during his time at Johns Hopkins University.

As well as being a geographer and urban theorist, Harvey is an activist, and all of his work seeks to make scholarship politically effective. This was confirmed on the second day of his visit, when Harvey lectured to an audience of around 60 on the topic of “The New Imperialism.” The title comes from his latest book, conceived in response to current American foreign policy. Harvey’s critique was generally well received by the audience. An equally congenial reception back at the Center concluded the public part of this very successful appearance. 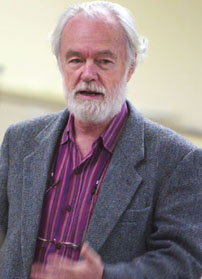 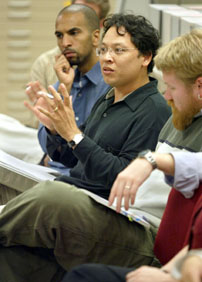