A high point in the Center’s Spring 2004 calendar was its Colonial Cities symposium and seminar on April 15 and 16. Both the Thursday seminar and the Friday symposium created numerous opportunities for cross-disciplinary inquiry and for comparisons across time and place under the theme of “Geographies of Difference.” The event also brought together faculty and students from several UWM departments for additional meetings with our distinguished visitors under the Center’s Curricular Initiative.

Held in the Center conference room, the Thursday seminar discussed a pre-circulated paper by Paula Sanders (Rice University) entitled “Keeping Cairo Medieval: World Heritage, Religion, and the Debates over Fatimid Monuments.” The paper, which Professor Sanders introduced with a presentation of visual materials, considers the conflicting standards of the international (though largely Western) preservationist community and those of the Bohra community of Ismaili Muslims with regard to the restoration of various Cairo mosques dating from the eleventh through the sixteenth centuries. The lively discussion focused on the complex relationship between spirituality, architecture, and the colonial legacy in the middle east and elsewhere.

On Friday afternoon, a capacity crowd gathered in the Department of History seminar room for the symposium, which began with presentations on colonial cities in three different times and places, beginning with the earliest. Alejandra Osorio (Wellesley college) presented “Indians, Castes, Spaniards and Urban Ritual Spaces in Seventeenth-Century Lima,” which examined the elaborate staging of Spanish royal power for the benefit of indigenous inhabitants. Paula Sanders introduced another portion of her current project under the title “Cairo of the Arabian Nights,” which uses the methods of textual criticism – in particular, the complicated publishing history of the much-loved tales – as a model for understanding the architectural accretions of the colonial city. The Berkeley historian Peter Zinoman discussed aspects of a new project under the title “Colonial, Urban, Modern: Interwar Hanoi in the Work of Vu Trong Phung,” considering how a Vietnamese journalist and fiction writer wove together the complexities of crime, disease, poverty and social division into a broader if veiled critique of the colonial situation. After a break, Anthony King (SUNY Binghamton), in a presentation that ranged widely across various literatures and themes, highlighted key issues and questions in the study of colonial cities over the past generation. 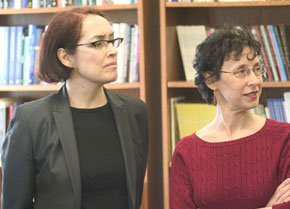