Art of the State conference 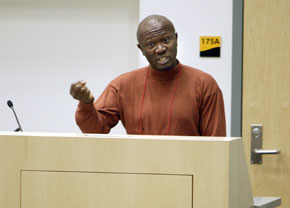 On October 21 and 22 the Center held its major, two-day conference for 2005-06. Buck Professor of Chinese History Douglas Howland (Fellow 2004-05) was one of the organizers, together with Luise White (History, Florida). Following welcoming remarks by Vice Chancellor for Research and Dean of the graduate school Abbas Ourmazd and Center Director Daniel Sherman, the proceedings began with a keynote address by Siba Grovogui (Political Science, Johns Hopkins). Grovogui not only provided a rich historical and disciplinary overview of the uses of sovereignty, but also urged the audience to think about the many “constitutionally-unclaimed” in today’s world and how they will eventually “determine on their own the conditions of their entry into the global sovereign compact.” Grovogui’s address was a fitting introduction to a conference seeking to link theoretical or scholarly work on sovereignty with today’s social, economic, and political realities. In keeping with Center practice, all papers in subsequent sessions were pre-circulated so that more time could be devoted to discussion. 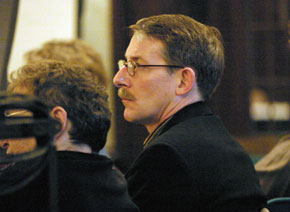 In the first panel, “States and Laws,” Eileen Scully (Social Sciences, Bennington) used the story of the repatriation of so-called “pauper lunatics” in the late 19th century to raise broader questions about extraterritoriality and diplomatic protection of Americans traveling overseas. Douglas Howland addressed a related topic from approximately the same era, namely that of the treaties concluded between Western powers and the governments of Japan and China over jurisdiction questions regarding non-Chinese and non-Japanese sailors. In his larger work, Howland seeks to rethink international law as a (flawed) project of modernity. Mark Philip Bradley (History, Northwestern) presented research he worked on during a stint as a Center fellow in 2003. His paper examined the effects of international law in a domestic context, specifically the ways in which civil rights activists in postwar America used international covenants, such as the UN Universal Declaration of Human Rights, to combat segregation at home. Bradley noted that this tactic also produced a backlash against what many saw as a threat to U.S. sovereignty; and as a result the U.S. became more wary of participating in international human rights law.

The first day of the conference concluded with a panel on “Laws about States.” Luise White discussed the case of post-1965 Rhodesia as a way to think about sovereignty. Rhodesia at this time, White argued, was not really representative of a (former) colony, but it was not truly an independent state either. The international context of the time, White argued, is crucial for thinking about sovereignty, as the economic sanctions imposed on Rhodesia demonstrated. Sanctions both limited Rhodesia’s sovereignty, and also forced the ruling economic and political classes to be “creative” in subverting them, i.e. act independently (albeit also illegally). The second paper, by anthropologists Martha Kaplan (Vassar) and John Kelly (Chicago) explored the “legal fictions used to constitute sovereignty in the nation-states of the UN world.” The body of their paper discussed some of the unintended consequences of the U.S.-led effort in the 20th century to fashion a world of nation states moderated by U.S.-designed international institutions. Diaspora, “leveling crowds,” political armies, “new wars,” and “strange wars” (state military power challenged by a non-state actor employing global media to tell a moral tale) complicate traditional sovereignty in many countries around the world today. 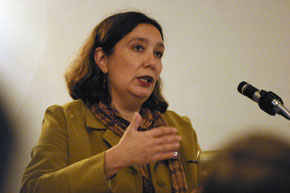 The second day, held at UWM’s Hefter Conference Center, opened with a panel on “States and Outlaws.” Aida Hozic (Political Science, Florida) discussed what she called the underlying tensions of sovereignty in the Balkans with a particular focus on the role of crime in states such as Bosnia-Herzegovina. She argued that crime, criminality, and the criminalization of cross-border practices and particular states are constitutive elements of sovereignty on the Balkans today. In a paper entitled “Media and the Sovereign Police,” Thomas Lamarre (East Asian Studies, Cornell) presented work on the nature of Japanese animation and its power both to reflect and shape reality. Focusing especially on the films of Oshii Mamoru and the writings of Giorgio Agamben, Lamarre explored the contingency of concepts of authority and sovereignty in 21st-century popular culture and politics. 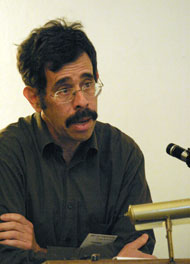 The next panel focused on “Questions of Territory.” Aims McGuinness (History, UWM, Fellow 2003-04) discussed the close links between sovereignty in 19th-century Latin America, United States policies, and activities by private U.S. individuals and organizations. Latin American intellectuals tried to imagine a genuinely sovereign space, “América Latina,” in response to U.S. intervention, thus creating what would later emerge as the concept for a distinct geopolitical region. Fred Cooper (History, NYU) presented his work on the post-World War II French empire and nation under the title “Alternatives to Empire: France and Africa after World War II.” He argued that the French empire at the time, including metropolitan France, was a layered and shared entity whose destiny—and distribution of sovereignty—was very much an open question in 1945. The ultimate outcome—independence for the African parts while France itself integrated with the wider European community—was not a given, least of all for the French and West African leaders involved. Finally, Kevin Dunn (Political Science, Hobart & William Smith) explored how the creation and utilization of national parks have been connected to the evolution of state sovereignty in the African Great Lakes region, specifically Uganda, Rwanda, and Congo. Echoing other speakers, Dunn argued that “in the 21st century, the political-territorial foundation of Westphalian sovereignty increasingly appears to be in crisis.” 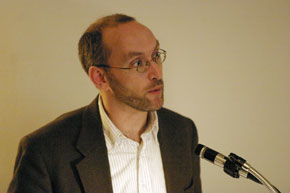 The final panel, “Questions of Populations,” also consisted of three papers. Leonard Smith (History, Oberlin) presented a paper on “Sovereignty and Wilsonian Idealism in the Middle East: The King-Crane Commission of 1919.” More than the story of a campaign contributor and college president put in charge of reconfiguring the Middle East, Smith’s paper was a reminder of the transitionary nature of the post-World War I moment. Westerners now assumed quasi-sovereignty in the Middle East through League of Nations mandates, and tried to determine what groups were entitled to their own states (and ultimately sovereignty), while realizing that time was not on the West’s side in the region. David Tucker (History, Iowa) explored the status of Manchukuo in the early 20th century, focusing on the motives and practices of Japan, Manchukuo’s founder. Tucker argued that while Japanese motives were not always very clear, Manchukuo’s story needs to be viewed in the context of Japan’s imperial competition with Western imperial powers. The final speaker took the participants back to the Balkans. In a paper entitled “Sovereignty after Socialism at Europe’s New Borders,” Keith Brown (International Studies, Brown) investigated the prospects for sovereignty in Macedonia after the uprising of 2001. Considering three “scripts”—reformist, nationalist, and criminal—Brown concluded that the precise nature of insurgent motives remains open to interpretation, but that in any case answers ought to be sought within Macedonian society, by paying “close attention to the micropractices of sovereignty,” and not through “the work of stereotype-construction by outside observers.”

A closing general discussion moderated by the two organizers was preceded by remarks by Robert Ricigliano (Institute of World Affairs, UWM) who commented on the conference proceedings from his experience in conflict mediation in Africa and the former Soviet Union. Throughout the two days, lively, engaged discussion among the speakers and other participants made “Art of the State” a provocative and intellectually stimulating event.