An audience of roughly 200 people greeted award-winning journalist and author Alma Guillermoprieto in the Union Ballroom on Thursday, April 10, 2003, under the combined sponsorship of the Center for 21st Century Studies and the UWM Union’s Distinguished Lecture Series. Guillermoprieto has published extensively in The New Yorker, The New York Review of Books, and other publications, and is the author of three books on Latin American politics and culture. Her topic at UWM was “Colombia: The Unbroken War.” 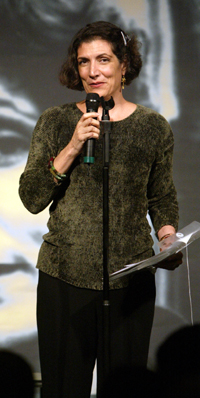 Guillermoprieto based her observations about Colombia and the ongoing civil war there on her experiences reporting from the region, including extensive interviews with participants on both sides of the conflict. She has always been interested in the personal “why” of war and insurgency, and her talk detailed some of her findings about the motives of those fighting. She described the organizer of a leading paramilitary group who fights guerrillas for the purpose of avenging his brother, who died at the guerrillas’ hands. She described teenage guerrillas who find American pop culture fascinating even as they express profound loyalty to their guerrilla leader, and former guerrillas, themselves still quite young, living in a half-way house in Bogota where most of their countrymen consider them dispensable.

In the question and answer session, Guillermoprieto agreed with a native of Colombia who described the social classes in that country as essentially separate nations, and observed that Colombians have long had trouble imagining themselves as a single country. This is true even at a geographical level: one relief map of Colombia has several sections marked “insufficient geographical information.” In the long run, she argued, the enormous profitability of cocaine and heroin that comes with prohibition will ensure that efforts at eradication in one nation will serve only to move production elsewhere. In any case, although the so-called “war on drugs” provides the pretext for American involvement in Colombian civil conflict, Guillermoprieto noted that some American military personnel are currently stationed in Colombia to protect oil production facilities owned by a U.S. company, Occidental Petroleum. Her talk thus provided a timely perspective on American foreign policy and intervention around the world.

Guillermoprieto’s interaction with the UWM community continued the following morning with her participation in the opening round-table session in the Center for International Education’s conference on Global Security. Aims McGuinness, assistant professor of history at UWM, summed up the views of many regarding Guillermoprieto’s visit: “Guillermoprieto offers an insightful and nuanced analysis of a war that is too often misunderstood, mischaracterized, or simply forgotten in the United States.” 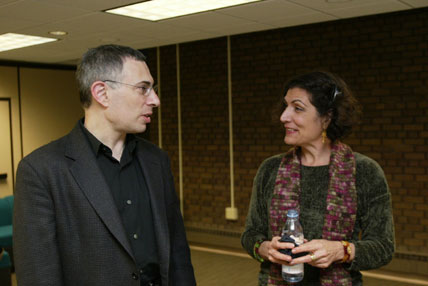