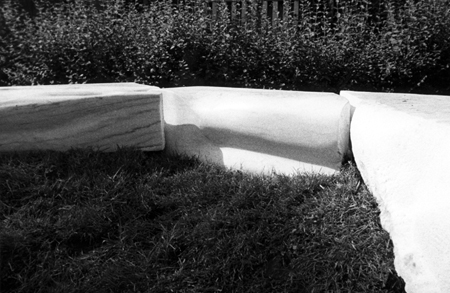 In 1973, sculptor Paul Aschenbach (below) was invited by the Center to create a piece called Copernicus Stones. Paul Aschenbach became renowned for his work that involved creating art with the help of the public; most of the resulting massive projects still exist in Vermont today.

The Copernicus Stones were originally erected June 25-29, 1973, on Summit Avenue in Milwaukee by Paul Aschenbach, his wife June, his assistant Terry Dinnan, many local neighbors, and UWM students. The project was sponsored by the Center in cooperation with the School of Fine Arts, Department of Art and Art Education, and financed in part by a grant from the National Council on the Arts.The current whereabouts of the Copernicus Stones are unknown.

What follows is a piece believed to have been written by Paul Aschenbach. All photographs which appear here were taken by John Alley, head of Photo Services at UWM at the time.

It is perhaps definitive of the human animal that he expends some portion of his energy on concerns other than those of mere survival.
The complexity of society ordains that some segments of the whole be active in these other areas of concern.

Just as the means of survival are more or less shared by the whole community, so the creative forces of a society, in order to remain vital, must find ways to share with others who are not specifically involved in creative activities.

In times of social re-evaluation, artists must not only seek new forms but must, at times, leave the privacy of the studio to work in public places for public reasons, accepting the vulnerability of a dialogue with the community in which their work will remain.

Freedom of expression is not just – bash and slash – but also control and discipline.

Working in public, building a sculpture with a community, does not shift the responsibility of the artist to people. The artist is the experienced person in the group. He must retain control and accept the final responsibility for the form, not by shutting people out, but by including them in his processes. 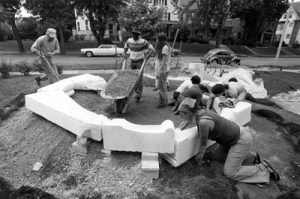 It is important to have people feel that their efforts are really useful to the sculpture.

While the time allotted and the attention span which can be expected for any project makes it necessary to precut some of the visual and structural details, it is important to have significant work left to be done on the work site.

The work left for people to participate in must not just be finished work but must involve the full ranges of processes, roughing out and finer carving large and small motions. The sculpture in this context does not become an extension of the artist as an ego, but of the artist as an individual acting in a society.

The building of a sculpture in public with people participation is an event; it has a beginning and end and a development over a time span.

The purpose or focus of the event is the production of an object. The object stays in the community; after the sculptors leave, it carries on a longer, quieter dialogue with the people who encounter it. It is important that the object be as intense, as meaningful, as beautiful as the event which produced it. 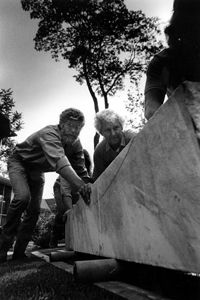 Nothing is forever. The time of making the sculpture goes by and the stone stays to have its silent conversation with whomever it encounters, as long as its place and its being in that place lasts.

The stones have been in many other actions in their geological careers. Their time on Summit Avenue, while a fixed reality with duration for us who experience it, is but a strobe blink in the stones’ time.

The meaning of the stones and their relatedness is a variable. The dialogue will differ from viewer to viewer. Perhaps the stones are more archaeological than “art.” The stones seem to imply that they were not made by us but were found, made by others for a whole set of obscure reasons which seemed important at the time. Whatever that motivation might have been, each of us now must find his own reality and meaning in them.

As an experience is a chain of events strung on some axial element which make it whole, the stones subscribe to the common radius which defines the circle they have fallen into.

Each is a unique object, but each is modified and fits to its neighbors.

Each stone becomes what it is not only out of its unique individuality, but out of its relationship to other stones and all make the whole.

People working, wordless, quietly side by side, are also communicating. 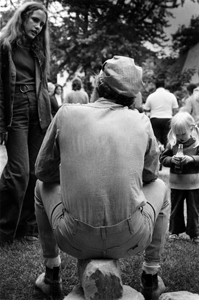 Things said, during a pause in work, even in jest, often carry more reality than the unctious pronouncements of the lecture room.

There are only so many hours in a week. So we worked late. One evening I noticed a twelve-year-old boy pounding on a large stone with great gusto. He swung the bushing hammer with such abandon that I feared for the marble and the other children around him. Dark came so that we could retrieve the tool without having to dampen the obvious joy he was feeling in the random banging. Next morning he returned full of energy, refreshed by sleep, ready to pound some more. But first we talked about the tools and the forms the stones were to take. We chalked out a specific passage and demonstrated how to develop it. By evening he was in control of the tools and the surface he was working on. In two days he was teaching newcomers how to use the equipment and was aggressively protective of the forms and the careful development of their surface.

Other people came as learners and ended teaching each other; by week’s end we heard great discussions among the neophyte sculptors on the proper sequence of polishing stones necessary for a particular finish.

The boundary between “we” “they” became softer, and the work became “ours.”

Each morning on Summit Avenue we had a brief quiet time to gather our ideas for the day, to think about the stones and their relationship to each other.

It was a pleasure to look up from carving a detail, to comment on the weather, to talk a bit about the sculpture’s progress, or to hear about a child’s comments at supper after his day at the stone. It made our activity seem to belong to something which felt bigger than the rather ingrown, cannibalistic “Art World” where artists’ efforts seem to have been confined. 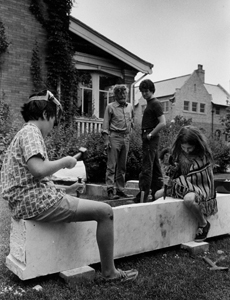 Then the children came.

A young man drove up to put in a half-day of carving and lifting stone before going to his afternoon job. By midmorning a dozen hammers were tapping in and out of sequence, and the whisper of carborundum blocks formed a background to the talk where a group sat and polished.

Student groups from the University, parents, babysitters, children, passersby, teachers on vacation, all worked on the stones.

As the week passed, the sculptors’ forms developed, not as alien things evolved in the privacy of a studio, but as a form which belonged to the people who experienced its making – to the community in which it grew.

Understanding came – not dependent upon the ability to verbalize the forms – but through the deeper knowing of having participated in its making. 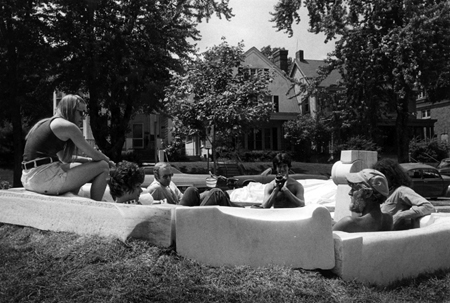