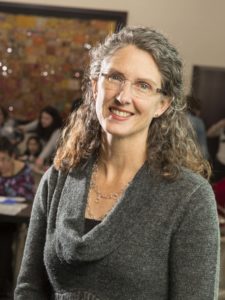 Anne Basting was named C21 director starting with the 2021-22 academic year and is a professor of English at UWM.

Anne Basting (Ph.D.) is a scholar and artist whose work focuses on the potential for the arts and humanities to transform our lives as individuals and communities. For over 20 years, Basting has researched ways to infuse the arts into care settings with a particular focus on people with cognitive disabilities like dementia. She is author of numerous articles and four books, Creative Care: A Revolutionary Approach to Dementia and Elder Care (Harper One, 2020), The Penelope Project: An Arts-based Odyssey to Change Elder-care (University of Iowa Press, 2016) co-edited with Maureen Towey and Ellie Rose; Forget Memory: Creating better lives for people with dementia (2009) and The Stages of Age: Performing Age in Contemporary American Culture. Named a 2016 MacArthur Fellow, Basting is also the recipient of an Ashoka Fellowship, Rockefeller Fellowship, a Brookdale National Fellowship, The Randy Martin Spirit Award, and numerous major grants across both the arts and social services. She is author and/or producer of nearly a dozen plays and public performances, including Wendy’s Neverland (2019), Slightly Bigger Women (2015) and Finding Penelope (2011), a play inspired by a year of intergenerational conversations about the myth of Penelope from Homer’s Odyssey, and professionally staged at a long term care community. In all her work, Basting is striving toward a moment when the arts are fully infused into care systems.

Basting holds a Ph.D. in Theatre Arts from the University of Minnesota, and a Masters in Theatre from the University of Wisconsin. She is founder and President of the award-winning non-profit TimeSlips Creative Storytelling, an international alliance of artists and caregivers bringing meaning to late life through creativity. Founded in 1998, TimeSlips became an independent non-profit in 2013 and how has over 900 certified facilitators in 48 states and 20 countries.

Basting advises the burgeoning field of arts and health and gives keynote addresses across the world on the power and potential of Creative Care. Basting was Founding Director of UWM’s Center on Age and Community from 2003 to 2013, where she fostered partnerships between scholars, students, and service providers, and translated applied research into innovative educational tools including manuals, films, and social media. Now a Professor in UWM’s Department of English, Basting teaches Community Engagement and Storytelling, and coordinates the Student Artist in Residence program, a year-long experiential learning program in which student artists live in and foster community building in care settings.

Basting’s most recent project I Won’t Grow Up, was an ambitious reimagining of the story of Peter Pan with 12 rural nursing homes across Kentucky. She is currently guiding a collaboration with Dementia Inclusive Durham to bring Beautiful Questions to people with dementia and transform the answers into a community-wide celebration.