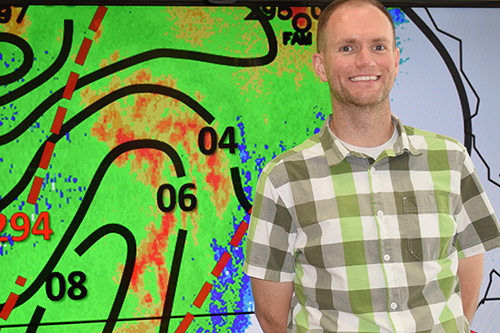 Climate-fueled weather events, such as hurricanes, fires and drought, are becoming more common, and better tools are needed to understand and predict changing weather patterns.

To better understand the Earth’s atmosphere and combat climate change, the U.S. Department of Energy (DOE) recently announced $14 million in funding for 21 projects aimed at improving climate change predictions — including a project that involves Clark Evans, a professor in UW-Milwaukee’s Atmospheric Science program in the School of Freshwater Sciences.

Evans will collaborate with Rebecca Adams-Selin, the principal investigator and a researcher from Atmospheric and Environmental Research Inc., on a three-year project, “Establishing a Holistic Understanding of Mesoscale Convective System Stratiform Precipitation Regions.” The DOE awarded $716,831 in total for the project, with $276,265 of that going to UW-Milwaukee.

“MCSs are important contributors to the water cycle across the world, including the central United States where they account for up to half of the precipitation that falls during the warmer months of the year,” Evans says. “In addition to heavy rainfall, MCSs are occasionally associated with damaging winds and thus pose a significant threat to life and property in the regions that they impact.”

This precipitation structure and the wind flows that occur within it are governed by the heat released when water vapor turns to liquid or ice. This phase change of water is affected by processes occurring within the MCS (some of which occur on microscopic scales that must be crudely approximated in weather prediction models) and by how the MCS interacts with its environment.

Observations collected from multiple field campaigns over the last decade will help the researchers quantify these contributions and their variability, which will then help diagnose errors in the numerical representations of these systems in accompanying very-high-resolution numerical simulations. The result could be better models for predicting the longevity, potential for damaging surface winds, and the amount of rainfall stemming from an MCS.