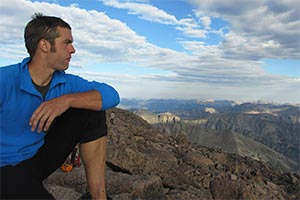 Title:
Observations of an elevated MCS environment during the PECAN field campaign

Description/Abstract:
Mesoscale convective systems (MCSs) that derive their energy from layers of air above the planetary boundary layer (PBL) are referred to as ‘elevated.’ These systems are responsible for a large percentage of warm season flash floods in the continental United States. Despite their impact on society, direct observations of the environments of these MCSs are lacking. I will present a unique analysis of radiosonde observations of an elevated MCS that took place in Iowa on 24 June 2015 during the Plains Elevated Convection at Night (PECAN) field campaign. The eastern flank of this MCS produced an outflow boundary (OFB) and propagated southeastward along this OFB as a squall line. The western flank of the MCS remained quasi stationary approximately 100 km north of the system’s OFB and produced localized flooding. PECAN observers launched a total of 16 radiosondes near the MCS’s eastern flank and 4 radiosondes near the MCS’s western flank during this event, providing a comprehensive dataset for this analysis.

The effective inflow layer (EIL) to the eastern flank of the system underwent a substantial increase in convective available potential energy (CAPE) and decrease in convective inhibition (CIN) during the 4 hours prior to the arrival of the squall line. The increase in CAPE predominantly resulted from strong positive horizontal moisture advection whereas the decrease in CIN resulted from a combination of positive horizontal temperature and moisture advection within the system’s EIL, and environmental cooling above the system’s EIL. Lifting directly above the southwestern OFB was insufficient to raise parcels to their levels of free convection (LFCs). Parcels here required approximately 100 km of horizontal travel after they encountered this OFB to be lifted to their LFCs and to enter convective updrafts. These results provide observational validation for theories in previous literature that have primarily been developed from numerical modeling experiments.

Comparisons between output from numerical weather prediction (NWP) models and observations of this event suggest that moisture biases in NWP models led to under predictions of CAPE, over predictions of CIN, and subsequently produced errors in MCS forecasts. I will conclude by discussing potential sources of these model biases and avenues for future work.