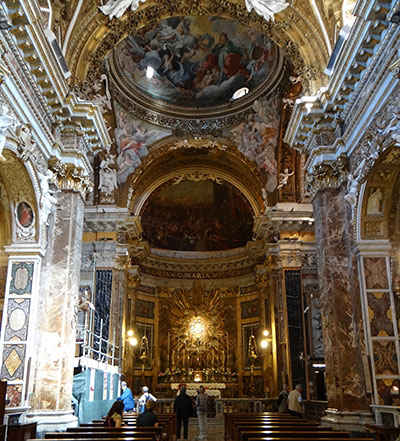 Graduate student Samantha Landre is currently writing her thesis on the bel composto of Gian Lorenzo Bernini’s Cornaro Chapel (1647-1652) in Santa Maria della Vittoria. Her thesis advisor is Associate Professor Tanya Tiffany. Thanks to the generous contribution of the Jeffrey R. Hayes Graduate Research Award, Landre was able to travel to Rome, Italy for two weeks to perform research.

Landre reports, “During my stay in Rome, I successfully met my goal of furthering my thesis research concerned with the bel composto (beautiful whole) of Gian Lorenzo Bernini’s Cornaro Chapel (1647-1652) in the Roman church of Santa Maria della Vittoria. The advancement of my research was due to my first-hand experience of the Cornaro Chapel and other Roman Baroque works. This is especially important to my thesis because I am exploring the way in which every part of the chapel’s bel composto engages with and performs for its intended viewer.
As the focus of my thesis, the Cornaro Chapel was naturally the first visit of my stay. Unfortunately, for the purposes of my visual experience and its photographic documentation, the chapel was being cleaned. This did not detour my experience of the church of Santa Maria della Vittoria, however. I able to speculate how a devotee would have perceived the chapel in relation to the main altar, as well as witness the chapel’s visual importance in the context of the church’s interior.
My search for a further understanding of the visual culture that informed Bernini’s Cornaro Chapel led me to explore its precursors. This included the Pantheon, whose multi-colored marble, repetitive architectural elements, and altar design inspired Bernini during his work renovating the monument. Also, Raphael’s work in the Chigi Chapel of Santa Maria del Popolo (1513) and Carlo Maderno’s Caetani Chapel in Santa Pudenziana (1601) are Roman examples, among many, that I am now able to argue were inspiration for Bernini’s bel composto.
Furthermore, I visited other chapels and works by Bernini, himself. These works were significant to my research because they were forerunners to, extensions of, or purposeful diversions from his design of the Cornaro Chapel. For my exploration of the figure of Saint Teresa, the visual comparanda found in Rome consisted of the sculptural altarpiece, Saint Bibiana, of the Church of Santa Bibiana (1624-1626), the sculpture, The Blessed Ludovica Albertoni, in the Alteri Chapel of the Church of San Francesco a Ripa (1671-1674), the Memorial to Maria Raggi of Santa Maria Sopra Minerva (1647-1653), and the sculpture, Habakkuk and the Angel, in the Chigi Chapel of Santa Maria del Popolo (1652-1656). Roman works that I will relate to the figures of the Cornaro family are those in the Raimondi Chapel of San Pietro in Montorio (1638-1648) and the Bust of Gabriel Fonseca of San Lorenzo in Lucina (1644-1655). Lastly, works that I will use for architectural comparison, among those chapels already stated, include Bernini’s Santa Andrea al Quirinale (1661-1670).”

Thanks Friends of Art History (FOAH)