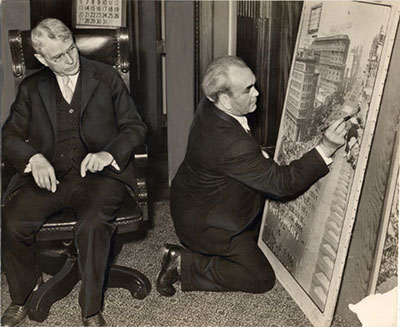 On Thursday, November 12th, Jordan Bear, Associate Professor at the University of Toronto, gave a lecture titled “Blowing up the World: On the Evidentiary Cultures of Enlargement, ca. 1893—1917.” In it, Professor Bear discussed complicated status of photographic enlargement as a form of evidence, using as an example the case of Tom and Rena Mooney, who were convicted of bombing the 1916 San Francisco Preparedness Parade. The lecture was attended by faculty, staff, and students from the Art History Department as well as members of the Milwaukee community.

Jordan Bear specializes in European art of the long nineteenth century and the history and theory of photography. He received his PhD from Columbia University in 2009, having received fellowships from the American Council of Learned Societies and the Metropolitan Museum of Art. Earlier this year Professor Bear published his first book,Disillusioned: Victorian Photography and the Discerning Subject. His work has been featured in myriad journals (including Visual Resources, History of Photography, andCabinet), and he has contributed to exhibition catalogues such as the Metropolitan Museum of Art’s Faking It: Manipulated Photography Before Photoshop and the Morgan Library and Museum’s Mannerism and Modernism.